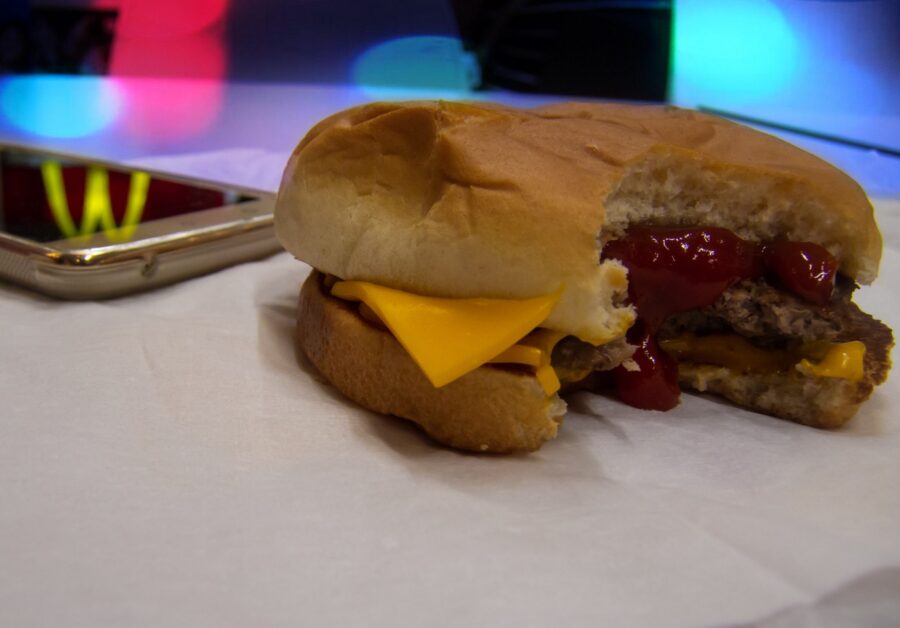 It’s 1 o’clock in the morning and you and your friends are headed home from a night of [enter whatever it is you would like your mom to think you were doing here], and you get that grumbly-in-your-tumbly. All the healthy options closed three hours ago, and you’re left with the following choices:

1. Mystery-meat tacos with processed cheese from a place that also sells burgers and, surprisingly enough, egg rolls
2. “Chicken” pressed into uniformly shaped “nuggets”
3. Mexican food that you know damn well has a very high chance of inducing the runs in about 5 hours

Fast food is quick, it can be pretty tasty (sometimes), and it’s convenient in a pinch. The decision to pick up some fast food for lunch, dinner, or late-night snack comes with relative ease and usually without a second thought. Really, the only time that there is any kind of second-guessing is when the brief thought of a healthy diet comes into our head. However, that is quickly swept away by the prospect of a large Oreo milkshake for $3.99. All in all, fast food might not be the best for us, but it’s all-together innocent, right? Well, it seems this might not be entirely true. As a matter of fact, when you take a closer look at things, you find that most everyone’s favorite quick-eats chains have some sort of political affiliation. Which, boiled down, means ulterior motives.

The following article was inspired by the outrage earlier this month over John Schnatter, the founder of Papa John’s Pizza, attending a Trump rally sporting a Keep America Great sticker.

And the internet had something to say about it…

Nearly every major fast-food chain has some sort of political affiliation; take Chick-fil-a for example. The restaurant is still undergoing heavy fire because in 2017 they used their charitable foundation to donate over $1.8 million to different groups that are historically anti-LGBTQ. However, not all fast food joints are so forthcoming with their connections.

Unknown to many (including myself before doing some research), restaurants such as Chipotle, KFC, Starbucks, Dairy Queen, and McDonald’s all have some sort of tie to a party. Remember that Big Mac you had a few years ago? Probably not, and no one expects you to, but that sandwich helped contribute to the $2 million donated to the Republican party by the Golden Arches in the 2016 election.

McDonald’s, and many other chains perform this political sponsorship via their very own Political Action Committee PAC. PACs have been around since 1944 and are defined by the Center for Responsive Politics as “a political committee organized for the purpose of raising and spending money to elect and defeat candidates.” These go hand-in-hand with organizations called “interest groups.” Interest groups are fundamentally what their name says they are: a very specialized group of people that have a particular interest or agenda they want to push through legislation. For example, Exxon Mobil, one of the world’s leading petroleum manufacturing companies, spent over $11.8 million to benefit the Trump campaign during the 2016 election. The Trump administration, of course, is a major proponent of lowering fuel emission regulations, resulting in flourishing gas companies. Basically, in this case, Trump gets elected = easier money for Exxon Mobil. That simple.

Attached (below the following quote) is a copy of the first page, along with a link to the McDonald’s PAC’s approved and amended policy. There is a strong dystopian-feel to the wording and underlying message being put forth by the corporation. One aspect of the statement that stands out as particularly off-putting (the kind of off-putting that makes you squirm in your chair a bit) is that fact that the speaking group refers to themselves as “The Company,” and “The Company” refers to the document as, “The Policy.”

Cult is the word that comes to mind at the moment. Anyone else?

“Generally, the Company does not make contributions to political parties, candidates for public office or political organizations. However, because public policy issues have the potential to impact the Company’s business, its employees, franchisees and the communities in which McDonald’s restaurants operate, the Company’s management believes that in certain cases it may be appropriate and in the Company’s best interests to use its resources to make Political Contributions (as defined herein). Therefore, McDonald’s Corporation Board of Directors has adopted this Policy to ensure that such Political Contributions are made in a manner consistent with the Company’s core values and to protect and/or enhance shareholder value.”

Here is the link as well

If you’re wondering what these “core values” and “shareholder values” might be, I’ll let you in on a little secret…they’re talking about protecting their wallets. It’s all about money and if you replace “values” with “profits,” the message becomes a whole lot more sinister. Think of the image of the cartoon robber baron with the handlebar mustache rubbing his hands together, laughing and sitting atop his golden toilet. Got it? Then you pretty much understand what’s going on.

Therefore, if you really want to spark change, or start a dialog with likeminded people, you’re going to have to hit the participants where it hurts them; where their real core values reside.

As this piece explained, a major participant in the political arena is the fast-food industry. We give them money harmlessly, and it is reinvested through their PAC into a political party that one might oppose, unbeknown to the general public.

This piece is not a flaming torch nor is this a pitchfork. This is meant to provoke thought and hopefully, peaceful and simple, yet impactful action. Regardless of political affiliation, if you’re unhappy, get your opinion off of Twitter, off of Facebook, do some research, get educated and take the proper action. One thing we as a people can change is whether or not we spend that extra dollar on some fast food.