Underlying Themes in The Host (2020) by Rob Savage

The right film for the right time 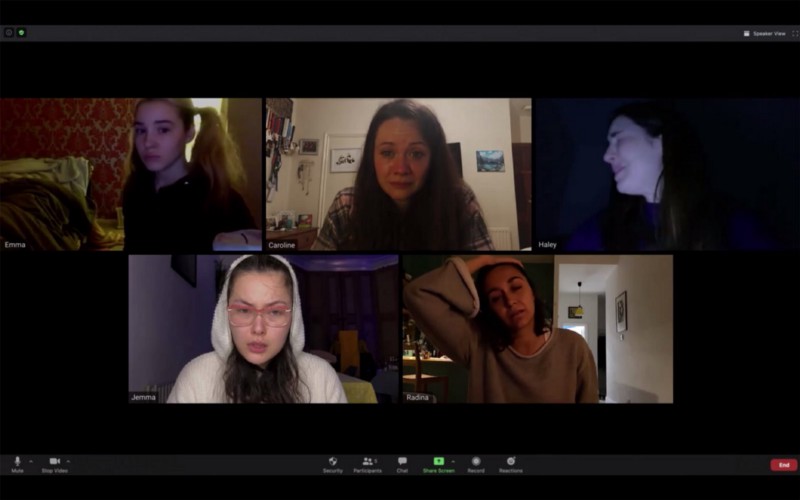 When the pandemic forced most businesses to shut down and lockdown measures coerced people to stay home, a lot of people watched so much Netflix that they started running out of things to watch.

With huge blockbusters such as Wonderwoman (2020) and James Bond (2020) all delayed until the fall, people were desperately trying to find new shows and movies to watch for leisure. Worse yet, horror movies that normally premiere in theaters during the hot summer months where one can relax in the breezy theaters, were also delayed until further notice.

That is when advertisements for the film The Host by Rob Savage started featuring on YouTube and social media platforms, and piqued the audience’s curiosity.

Rob Savage and his producers took the quarantine as a chance to make the film a huge hit, especially when the horror genre was taking a break from society. The timing of the film release, which is also exclusively only available by downloading a horror streaming service “Shudder” is clockwork.

What works so well with the movie is that it is extremely relatable to the majority of the audience’s lives during the pandemic. Many people were still at home on their computers and phones, and the film mimics the viewers’ interfaces on the computer. The Host by Savage explores how a group of friends awaken an unknown spirit through a Zoom call.

The film can be similar to a horror version of “Paranormal Activity” (2009) or “Unfriended” (2014), but it is unique in the way in which the film delves into societal and economical problems that we are dealing with in 2020.

The film is not scary because of the jump scares and random objects paranormally moving behind the characters on the Zoom screens, but because it gives the audience a sense of being alone without being able to see their friends in person.

Inclusively, the film explores the themes of social distancing, the 2020 pandemic and its recurring ghost motif, and the frightening feeling of isolation. The deeper meanings behind these challenges and the film’s recurrent themes all make the horror film spectacular.

The character development is also superb, since all the characters seem like one of our friends or a friend’s friend. They seem like they can be in college and are someone who we talk to in our social groups, work, or school in our own zoom meetings. The people are relatable to our societal figures and this drags us into the movie more as it continues, because the characters truly engage with the viewers.

The film explores the new concept of social distancing, at first through activities that the audience can see on the screen. One person drinks and is distracted from zooming with his friends by his crazy girlfriend, one is a prankster who does not take anything seriously, and the main character is really trying to dig deeper and solve the mystery behind the ghost that is haunting her.

Because social distancing is a new societal standard, the film illustrates the activities that people engage in during the pandemic. The film shows that people have adapted to a new change and are living their daily lives mostly at home alone.

Even though the jump scares are scary at times, the audience is already very used to jump scares from the shaky documentary style footage technique. Dating back to Paranormal Activity (2009), people have seen too many horror films with typical cliché jump scares. The ghost editing techniques have been overused and are not unique on the screen.

Therefore, this film does not scare the audience through jumpscares and the editing in general, but scares through the underlying theme of the pandemic, and its recurring ghost motif. The recurring ghost motif throughout the film is a symbol of the fear of the pandemic. People were under lockdown at the beginning of March, when coronavirus was beginning to spread all over the world. Everyone was hoarding masks and food, all because of the fear that the virus would make everyone sick or even kill them.

Similarly, the ghost motif throughout the film is the fear that this entity (virus) will eventually injure and kill them. The ghost enters the house of the characters and randomly devours them when they are least expecting it. Like the virus, no one can see the ghost and neither can the audience.

One scene in particular mentions the main character thinking the ghost is her family member, but actually ends up being someone entirely different. Likewise, the virus comes in many forms, through your family, friends, or someone you don’t know on the street. You don’t know if you have the virus for sure, if you ever had it, or have never caught it. Rob Savage brilliantly creates the ghost motif to symbolize this virus that people are afraid of in our daily lives.

Inclusively, the last theme of the film is being isolated from your friends and loved ones. The chilling part about the film is that the ghost can jump around to where everyone is through the zoom meetings, and no one is safe. They are all on their own since no one is together, with no way to escape the ghost. The way that the film toys with the viewer’s mind is remarkable.

The characters are all alone in their empty homes waiting for their imminent deaths by a ghost, and the fact that they cannot meet to face the ghost altogether is the scariest part. Even when one character risks her life to go to their friend’s house to check up on her in the middle of the pandemic, the characters are still always alone. Finding out that the friend has disappeared (possibly dead), she now waits for the ghost to hurt her.

The film runs extremely short at 57 minutes, and the factor that scares audiences most is that even at the end of the film, our pandemic in real life is still not over. We are still quarantined, still isolated, and still doing zoom meetings as we wait with uncertainty. The film keeps us thinking about our social situations and how long we will live in these circumstances. So perhaps we are actually reliving the nightmare in Host, a hell we cannot escape.