Put down that beer bong and pick up an IPA 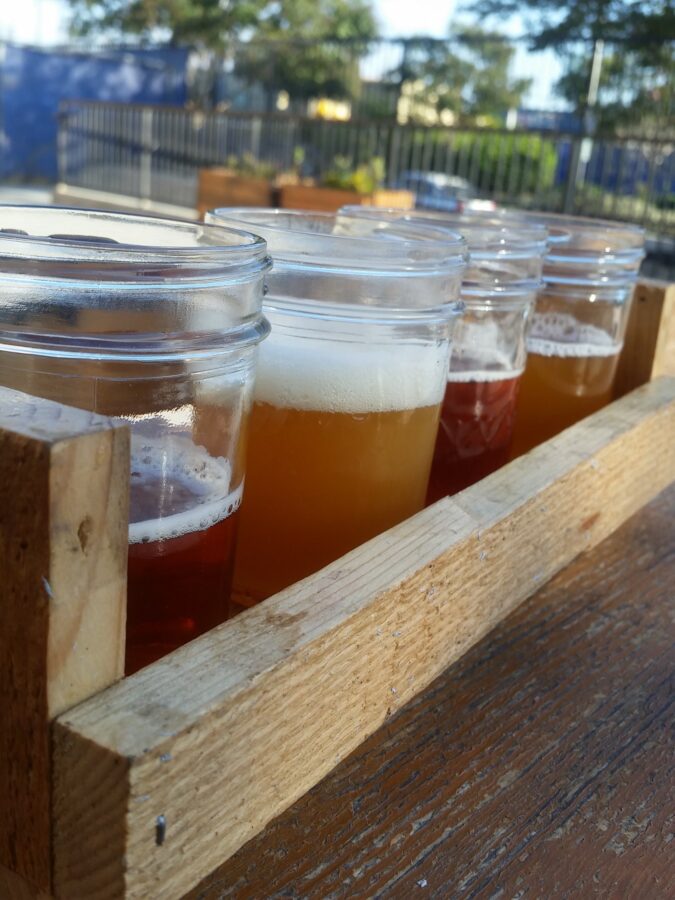 It’s 11:45 p.m. on a Friday night. You head to an ABC party (wearing A-nything B-ut C-lothes) thrown by the biggest fraternity at your school, and it does not disappoint. The music is blaring, the alcohol is flowing, and everyone is in an exceptionally good mood. Why wouldn’t they be? They’re all substantially buzzed. First you encounter the dance floor, jam packed and reeking like some sort of vodka infused gym towel. Still, you consider joining the madness until loud chanting in the kitchen distracts you. You make your way over and find a few frat guys who have busted out their beer bongs and are cheering their brothers on as they chug a beer, most of which will run down their faces and make its home onto their floors. Then you go out the back door into an entirely different beast; flashing probe lights dancing to the beat of the music, super intense beer pong matches, girls swimming in their underwear, and in the corner… a circle of about five people sitting around an ice chest full of beers you’ve never heard of. Lagunitas, Deschutes, Stone? And what the hell is an IPA?

Five years ago, the craft beer movement was just beginning to gain traction. Today, Indian pale ales, milk stouts and sours are the meat and potatoes of a college student’s beer diet. And it is gaining a following for good reason. Craft beer is both traditional and innovative; a local and worldwide movement. It is a multifaceted industry with a rich history and a bright future, and it has changed the way we consume our alcohol. But more importantly, it has profoundly affected the way college students consume beer.

How Big is it Today?

Over the span of nine years, independent brewers have increased their production of all things “craft” by almost 300 percent, and although overall beer sales are down by 2 percent nationally, craft beer sales are up by nearly 20 percent since 2013. Not to mention that in the midst of an economical crisis, independent breweries pumped $33 million into the U.S. economy, and created more than 360,000 jobs nationally.

A study conducted by Kendall College earlier this year shows that 43 percent of people aged 25–34 prefer the taste of craft beer. Jacy Valdivieso, 23-year-old beer enthusiast and recent graduate of California State University Northridge, said that the exponential growth of the craft beer world has prompted brewers and youth to pay close attention to each other.

“Breweries want to produce the next hip thing to drink and they market themselves that way. It is working for a lot of them.”

In the same study, experts predicted that craft breweries will triple their sales in the next three years.

Marcelo Larpin, a 23-year-old business major at California State University Fullerton who identifies himself as an avid craft beer lover, is not surprised. “Craft brewers have marketed their products with the emphasis on being a local brewer bringing their audience local tastes.

Larpin said that craft beer has grown and will continue to grow despite attempts by big beer companies to advertise craft-like beer, emphasizing smaller batches and trying different flavors in an effort to win back customers.

How many people saw the 2014 campaign for Bud Light’s Summer Brew? Blue Moon lovers should know that they are really drinking a beer crafted by the super brewer’s of Coor’s Brewing Company. Why are large corporate brewers suddenly changing the way they brew? The obvious answer is craft beer. Craft brewers give new life to traditional styles of beer, like the pale ale or the Belgian stout, but they have also introduced America to entirely new styles like milk stouts and sours. Brewers of the craft world are also changing the way beer is distributed. Northern Arizona University student Austin Daugherty, 22, works for Stone Brewery, one of the most successful and well-known craft breweries of the decade. Daugherty said that at Stone Brewing, they distribute for other small brewers like Modern Times Brew Company because they like the beer they produce and they want to push their product.

“Even though breweries compete against each other, they all pull and root for each other too. You will never see Coor’s distribute for Budweiser.” Craft breweries are changing the market and making history.

“Craft brewers have expanded the ways beer can smell and taste and that’s why they are an actual threat to take market space from the big breweries, something that has never happened so rapidly before,” Valdivieso said. Although Larpin and Valdivieso are correct about craft beer in the marketplace, the party scene will always thrive on “cheap” beer.

Daugherty is a prime example of a craft beer lover in college: he loves his beer and he treats it with respect. He would never pour Stone’s Sublimely Self-Righteous in a beer bong or try to shotgun Pizza Port’s Chronic; it just doesn’t make sense. Most of these beers have an alcohol by volume percentage that ranges from 6 all the way to 17, which makes it a bad choice for flip cup, beer pong, and chugging activities. Lindsey Nevarez, a 22-year-old student and sorority sister at University of La Verne in Southern California, said craft beer has a place in her heart, but not at her beer pong tourney.

“Cheap beer will always be used for game purposes. Let’s face it, no one is going to play beer pong or flip cup with a $15 six-pack of craft beer. There is a time and place for both,” she said. Alas, craft beer is in no way cheap. You can pay upwards of $10 for a single bottle if it’s a small batch brew or an anniversary release. And if a college student working a minimum wage job that barely pays for rent, tuition, and food chooses to buy such a bottle, why on earth would they let it fall into the clutches of the King’s cup? (Which are always equal parts tequila, Rumchata, and Smirnoff Ice, with just a splash of backwash. Yum…) Devin May, a 23-year-old wholesale assistant at Unique Vintage of LA, said that craft beer isn’t about getting trashed.

“It’s more about coming over for bottle shares or hanging out at a brewery to listen to good music and play games.”

But there are exceptions to every rule.

“There are definitely people who walk around the house party with a six pack of Ballast Point’s Sculpin. I’m fine with being that person, but I also have nothing against a 99 cent can of PBR from 7–11,”.

Even though the world of beer drinking has expanded, there seems to be clear divisions between traditional and craft beer drinkers. Craft beer connoisseurs have been labeled “beer snobs” because of their sophisticated palettes. May said that she now views corporate breweries as “L.A. Water & Power” in comparison to craft breweries. “It’s like tap water, which is so pretentious to say. They’re becoming something people drink out of convenience instead of preference.”

But beer snobs are perceived as just that: pretentious, which is not what they want. Beer enthusiast Valdivieso said it was his boredom with regular beer that drove him to try Sierra Nevada Pale Ale and that is when it all changed for him. “To learn that there were so many beers out there in the world that were just as good or better only made me want to try more.”

Is it possible then that “beer snobs” are just wildly misunderstood? Urban Dictionary defines “beer snob” as a term given to those who enjoy high quality beer. They are often accused of being snobbish and looking down on others, or are thought merely to drink beer of higher quality than Bud, Miller, and Coors to feel or act superior to their peers. Valdivieso, who refutes that he is in fact a member of the snob cult, feels the term carries a lot of negative connotations, which may steer people away from trying something new. Instead of identifying as a snob, Valdivieso prefers “craft beer enthusiast and supporter.”

He said that a snob entails a certain hate for macro-beers that he doesn’t possess. “I have had micro-beers before and while I wouldn’t choose them first, I will probably drink them again. If I was a ‘beer snob’ I wouldn’t take pride and enjoyment when I try to help people find a new beer to enjoy. I would simply look down on them for not drinking craft.”

To him, there are no divisions amongst beer drinkers, but opportunities to teach each other about a new and expanding world that is unfolding. And when you think about it, a snob wouldn’t want to share that with you, now would they?

The story was published by Substance on behalf of Sasha Chavez.