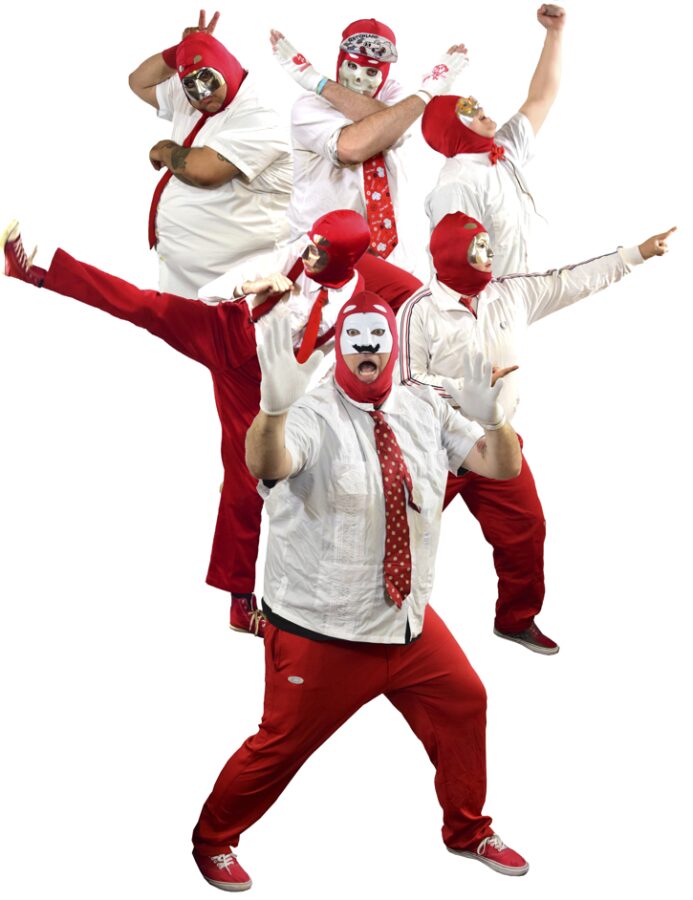 You walk onto the dance floor at a punk rock show and find yourself face-to-face with a drunk 6-foot polar bear in the mosh pit.

Overeager fans are ecstatic that this dirty carnivore is dancing and gyrating all over them. You stand there motionless wondering why there’s a freaking polar bear at a punk rock show. The confusion reaches new heights when you hear a loud male voice that sounds like an intoxicated Danish phone sex operator shouting: “We’re from Greenland, motherfuckers!”

You turn your head and you’re met with the piercing blue eyes of a very large man in a red and white mask with a bottle of Jameson in one hand and a microphone in the other. He sees the fear of the unknown in your eyes which fuels his desire to get as close to you as possible. He pulls you in by the arm and caresses you against his sweat-soaked white shirt and red tie as he serenades you with a song about clubbing. Except in this case the song isn’t about going out dancing with your friends; it’s about clubbing baby seals sung to the tune of punk pop that sounds like an alcohol-driven orgy between the Ramones, the Beach Boys, and an M-audio keyboard.

You start to bond with the eyes behind the mask when five more masked men shake the stage with a punk rock energetic mayhem of loud and fast guitar playing that could be heard from Joey Ramone’s grave. The crowd is treated to vulgar stage antics that include simulating intercourse with musical instruments and flipping off the first row.

You start to feel an overwhelming mix of conflicting emotions: shame, disgust, and ultimate euphoria … and realize you found your new favorite band.

I discovered the Maxies in the summer of 2008 when they opened up for Reel Big Fish and Streetlight Manifesto in Anaheim, Calif. Once they hit the stage with their no-holds-barred pop punk and stage antics, I didn’t know what to make of them. In fact, I wasn’t sure if I even liked them. I wondered, “Is this a novelty? Is this a prank the headliner is pulling on us? and “Why are they even on the show since they are insulting the very band that put them on the bill by calling them ‘Reel Old Fish’?”

And then it clicked. After seeing them a couple of times, I couldn’t help but enjoy them. It was like one big stand up comedic act that you can dance to. The music was infectious and wildly fun.

They were the essence of everything I couldn’t be: rude, excessive, raunchy, and the embodiment of the punk rock ideology of just not giving a shit. I wanted to vicariously live through them.

The story behind the Maxies is not without its mystery and hypothetical folklore. Ask any of the members about the band and you will find their mythos at a new level of outrageous, which only adds to the appeal and fascination that garners more fans at every show they play. Ask about the clothes they wear and they will tell you that red and white represents their homeland of Greenland or a feminine hygiene product. Ask about their masks and you will learn about their attempt at hiding their “boyish good looks” in fear of getting too much female attention or their former escapade as a Phantom of the Opera-themed metal band. Or ask about their early days of growing up on the hard ghetto frozen streets of their hometown of Nuuk and their rise to becoming the biggest thing to come out of Greenland since the formation of their glaciers and will tell you how they sold 300,000 copies of their debut CD despite Greenland’s population of only 60,000 citizens. If you’re lucky enough, you will hear tales about the early days of their early incarnation as a vocal interpretive dance group called “Ice Ice Baby” where their first rise to fame was apparently a Danish cover of All-4-One’s R&B 1994 ballad “I Swear.” Apparently.

The man with steel blue eyes is Maximum Maxie, the loud-mouthed fearless leader of his band of masked misfits consisting of Mad Maxie on bass, Donny Debauchery on guitar, Chrissy Pissy on keyboard, Cli-Maxie on drums, and All the Way Jay on lead guitar. Maximum and the Maxies now reside in Orange County, former home to bands like No Doubt, The Offspring and Social Distortion. The band claims they moved to the OC “to further expand their trail of wreckage across the United States.” They plan to dominate with a new brash sound with songs about clubbing baby seals, which they say is a hobby of the band back home in Greenland, their love of polar bears, and hitting the bottle.

“We’re bringing a new genre to America: drunk pop,” Maximum said. “We saw all these bands over there like Reel Big Fish and thought we can bring in actual talent. My main goal is just to get in an ice pick fight with [Reel Big Fish’s] Aaron Barrett.”

Mad Maxie says he hates when people ask why they’re the best band in the world. “They should just know,” he said.

The humble All the Way Jay agreed.

“We’re the greatest bunch of musicians ever put together in one group. People often compare us to a good version of Rush. We’re like the Muhammad Ali of Pop Punk but without the Parkinson’s.”

The band loves the Ramones. They love loud guitars and catchy riffs. They want the drums to keep the audience moving and the keyboard to compliment the stuck-in-your-head hooks that will keep you singing after the track is done. They appreciate the simplicity of a good pop song while keeping the essence of rock ‘n’ roll and punk rock alive in the attitude and style of their music. These reasons are why bands like Reel Big Fish, the same band that is often the target of the Maxies’ jokes, keep bringing them back on tour over and over again. Bi-Polar Bear Tom surfs the crowd at the House of Blues on the Sunset Strip in Hollywood, Calif., July 26, 2012. Photo by Shilah Montiel.

But the true essence of the Maxies is best experienced at one of their live shows. The in-your-face attitude and offensively silly stage antics full of juvenile innuendos and clever insults has gained the band both many lovers and haters, usually for the same reasons. They will make fun of the bands they play with on the same bill, and this usually results in either complete admiration and drinks from that night’s talent or a possible fist fight backstage. Their mascot, Bi-Polar Bear Tom, is allowed to roam free into the audience to get intimate with the “Frozen Army,” the name given to the Maxies’ fan base. The show is like one big comedic roast you see on Comedy Central with the audience and bands as their honorees.

“Playing shows is great,” Mad Maxie said. “We sell our stuff at a price here in America with inflation. People think we are giving them great deals on merch but when we go back to Greenland, we live like kings!”

And if you believe Mad Maxie, everyone wants to be with them.

“Someone is always attracted to us. Women, men, child … and other.”

Southern California-based TNN Radio’s Jimmy Alvarez has interviewed the band countless times and knows first hand the unpredictability of the band. “You never know what to expect from the band,” Alvarez said.

Alvarez said watching a Maxies show is like going to see the comedian Gallagher. You might not see a watermelon get smashed, but your skin had better be as thick. Take the example of a young girl named Summer who was celebrating her birthday at their show in January at House of Blues on the Sunset Strip.

“Your name is Summer? It’s fucking winter, bitch! This song is for you, it’s called ‘Happy Birthday, You’re a Dick.”

Substance is a publication of the Mt. San Antonio College Journalism Program. The program recently moved its newsroom over to Medium as part of a one-year experiment. Read about it here: https://medium.com/substance/the-experiment-be947b2ba13e