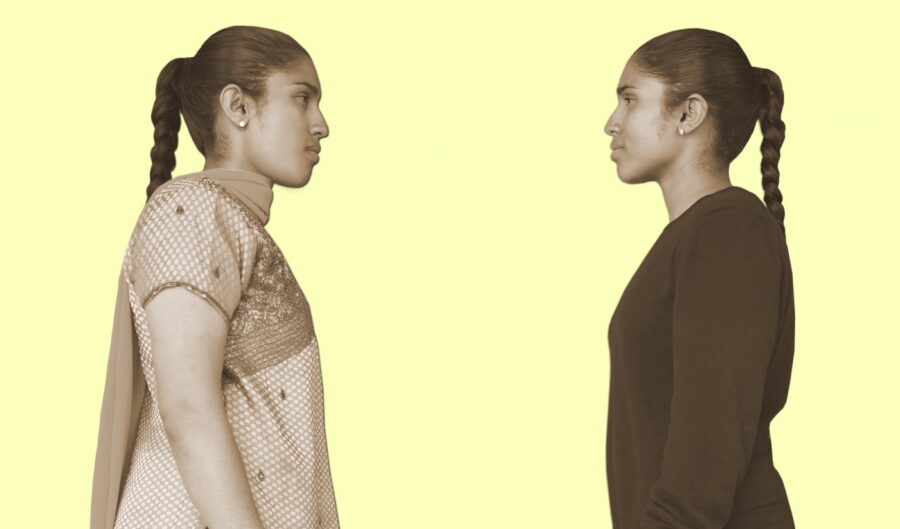 It was one of those days when I was on the brink of tears because everything that could possibly go wrong, had. By the time I got to class, I was feeling defeated when I heard a kind voice behind me say, “Hey! Why the sad face?”

I recognized this person as Thenushiya, or Thenu, as most students in the class referred to her. We had never spoken prior to this moment but I did know that she was always smiling and brought energy to every class session. The class was Intercultural Communications. By the end of the semester, we learned how to communicate with people of different cultures effectively regardless of our religious, social and ethnic backgrounds.

Thenu and I were assigned to work on a semester-long project together. The professor aimed to pair two people from completely opposite cultural backgrounds and have them learn from each other. As a woman raised by a mother who came to the United States from Mexico, I learned a lot about Thenu and received a lesson in “Sri Lankan Culture 101.” While I was excited to expand my cultural horizons, courtesy of Thenu and her family, I was saddened to learn of the internal struggle she was going through. Thenu, our classmate Kenneth Baca and myself in traditional Sri Lankan clothing goofing around at her house.

From the moment she turned 21, Thenushiya Vigneswaran knew that she would be faced with disappointing her parents. There was no way she would agree to an arranged marriage, ever. Thenu is a lesbian — something unheard of in Sri Lankan culture.

“When they approached me the first time with the arranged marriage, I was a little hurt realizing how real it was that they had no idea that I loved women and not men. They were blind,” she told me.

“They’ve offered to have a man to take care of me and give me everything I want. For some people, that is freedom but to me, it is not,” said Thenu.

While arranged marriages are becoming less common amongst Thenu’s generation, these marriages are still applicable and always will be because it is convenient to marry someone who already understands your culture and customs as well as preserving the culture for generations to come.

Thenu, now 24, said that even if she was not a lesbian, she would not agree to an arranged marriage.

“By agreeing to an arranged marriage, it’s saying you’re 100 percent in. If I were to marry someone, it wouldn’t just be a quick decision of ‘oh my parents say you’re compatible with me, let’s get married,” Thenu said.

Lesbian, Gay, Bisexual, Transgender (LGBT) acceptance and consequently LGBT visibility within the Sri Lankan culture is little to none. In fact, in Sri Lanka, homosexuality is illegal and homosexual acts are punishable by 10 years in prison.

While Thenu assumes that many gays are closeted, she only knows of one “out” LGBT identified person within her local Sri Lankan community. She said that people in this community do not even use the words “gay” or “lesbian;” it is something that is never spoken about.

Growing up in a culture where your lifestyle is not accepted can be very difficult. For Thenu, she knew at a young age that she was different and internalized this discomfort. She said that it felt like a cloud constantly looming over her.

“Being gay was a serious chip on my shoulder. Even if my friends were cool with it, I felt I was offending someone because I wasn’t comfortable with being gay,” said Thenu.

And then there’s the bullying that many gays experience. For Thenu, her struggle with her culture made matters even worse. During the ages of 12–16, she was made fun of at school for not taking care of her hair the way the other girls did. She was ridiculed for being a tomboy at a time when most girls began experimenting with makeup and feminine outfits. Getting ready for school was always a challenge because she didn’t want to put in the effort to look “girly” yet didn’t want to be the butt of the next person’s joke. “I always felt like I was being judged,” said Thenu.

Thenu describes herself as a “stud” – a lesbian who dresses more stereotypically masculine than feminine. When she first started dressing more masculine, she used the excuse that she was a basketball player so that her traditional parents did not question her. Her parents did not understand why their daughter did not appear more feminine like their other daughter, Priyanka, even outside the court.

“They didn’t understand how my sister loved dressing up while I wouldn’t even touch makeup or tight clothing. They even offered spending money for clothes and make up to make me look more presentable,” she said.

Even though Thenu has struggled within her own culture, she still considers her Sri Lankan culture to be very rich and present in her life. She takes pieces from both her Sri Lankan and American cultures to make up who she is as a person. She expresses herself through the way she dresses and through music — taken from American culture— yet maintains the core values of what it means to be a Sri Lankan — respecting others, finding a career to support the culture and then teaching her kids the same. But because her lifestyle clashes with the traditional values of the Sri Lankan culture, she conceals those aspects of her life from the community to fit in.

Thenu’s parents came to the United States two decades ago from Sri Lanka, an island country off the south east coast of India. Its culture shares common values and customs with the Indian culture, particularly a common belief in Hinduism — the religion Thenu’s family practices. There is representation of homosexuality and gender variance in Hinduism including an ancient concept of third gender, which is for individuals who exhibit strong components of both male and female characteristics. Additionally, sexual expression within a loving relationship is encouraged by Hinduism because it is an expression of love and commitment, not an expression of lust. While homosexuality is accepted by some Hindus, Thenu said the pressure to conceal her sexuality stems from what society thinks of her rather than religious beliefs so she chooses to conceal her sexuality and her preferred way of dressing from the Sri Lankan community.

“For somebody who wants to do their own thing, or dress or act way out of the norm, people of Sri Lankan culture will make you feel uncomfortable. It’s not about religion but that society’s norms,” said Thenu.

It is also expected in Sri Lankan culture to maintain a pure body and a pure soul. Sri Lankans do not get tattooed, cut their hair or undergo any obvious body modifications. Thenu said Hinduism itself is very open minded, but it is the society within the religion that oppresses people who try to express themselves as individuals.

Despite her struggles with acceptance, Thenu does not blame her parents for their views.

“They didn’t know any better because they had never been exposed to anything outside of the gender norm.” Thenu said that within the Sri Lankan culture, women are held to the standard of pursuing an education and then getting married.

When attending community events with her parents, such as birthday celebrations or religious events, she dresses in traditional Sri Lankan clothing as to not embarrass her parents.

“At the end of the day, I am a woman and I can use clothing to give myself the ‘straight’ look because I know that’s what will make my parents happy.”

She said that her masculine attire would be misunderstood.

“I feel like it would be awkward if I showed up wearing a stud outfit. To the Sri Lankan community, it looks like I’m a little gangster or a drug dealer or something extreme like that. They don’t know any better.”

She added that older generations of Sri Lankans blame American values, or a perceived lack thereof, for any perceived wrongdoing by the younger generation. Thenu’s sister, Priyanka, 21, supports her sister but said that she would probably get a lot of looks and be gossiped about if she showed up to a community event in her day-to-day stud clothing. “It’s hard for me to accept someone treating her badly for her sexuality but [Thenushiya] being open has shown us people’s true colors. The people that care will be supportive of her.”

Thenu hopes to accomplish great things in life. Being a gay woman is just a part of who she is, not what defines her or her abilities.

Thenu regularly films videos of herself singing and posts them to YouTube. She is pursuing a career in music and hopes to increase visibility for the Sri Lankan community in mainstream music in addition to increasing “stud” visibility as well. Thenu said there are not enough examples of non-ultra feminine women in the mainstream media and hopes to change that. She is currently working on an R&B album, with songs she has written and produced, with hopes of releasing it early next year.

Above all, Thenu hopes to be an inspiration to others who do not yet have the courage to come out to their families and to be their true selves. “I’m trying to help other people who are caught up with their parents hating the fact that they’re gay and trying to help them see that they can substitute that with something else,” Thenu said.

She wishes that she understood how to deal with the internal struggles she faced at a younger age and hopes to communicate this feeling through her music. She wants to be an example for people that do not yet feel comfortable with who they are.

Arnita Champion, a job developer in Career Services at Mt. San Antonio College, has known Thenu for five years and has served as a mentor to her. Thenu met Champion through The Bridge Program which offers several learning communities designed to increase students’ academic and personal success. Aside from guiding her academically, Thenu said Arnita was instrumental in helping her come to terms with her sexuality and being comfortable with herself. Arnita has seen Thenu during her lowest and highest points but said that here positive attitude remains the same.

“Thenu’s positive attitude is what makes her who she is; not how she dresses and not her lifestyle. It’s the way she thinks and responds to situations.” -Arnita Champion

Champion has witnessed Thenu radiate positive energy to her peers and is a motivator to those that know her. It turns out my first impression of Thenu was not an isolated act of kindness on her part; she was simply being Thenu, a kind human being that is not defined by her sexuality or whatever struggle she might be facing at the time.

Note from the author: After an earlier version of this story was published, Thenu contacted me and said that her parents read the article and her life changed as a result of it. Her mother happened to search their last name on Google and stumbled upon the original article. At the time, Thenu’s parents had no idea that she was a lesbian. She said that her parents were sad to learn of the internal struggle she was going through and were understanding and sympathetic toward her. They even shared the positive views of homosexuality in Hinduism. Since then, her relationship with her parents and siblings has improved overall.