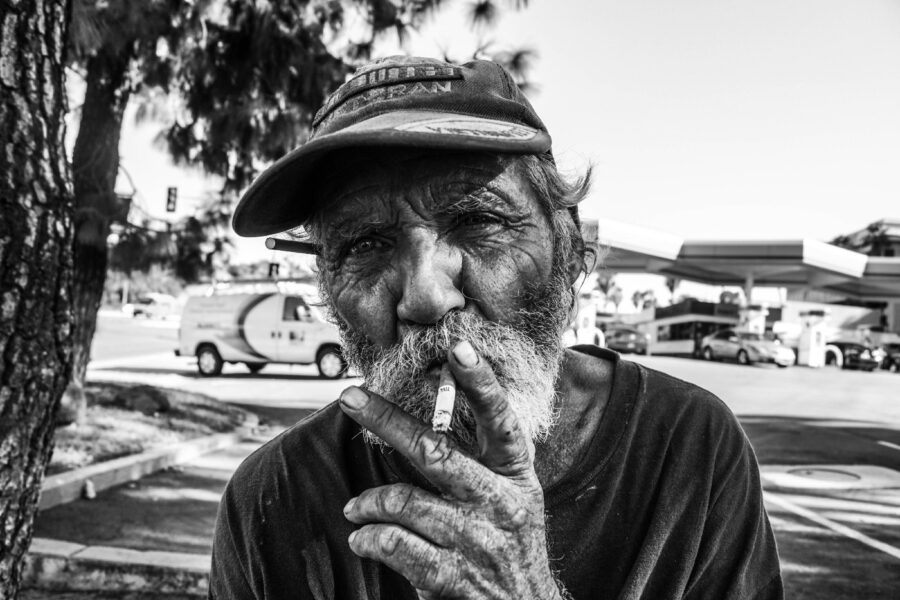 Pablo Unzueta
Rodney Farmer, 63, in Pomona, Calif on Sept. 24, 2014. Farmer shattered his right leg after parachute jumping during a front-line operation in Vietnam.

Story and photos by Pablo Unzueta

In 1919, President Woodrow Wilson proclaimed Nov. 11 as the first commemoration of Veterans Day. The year before, World War I ended. Today, Americans reflect on their appreciation for those who died and served in the U.S. armed forces. Thousands of families have lost soldiers who were wives, husbands, fathers, mothers, sons and daughters.

It is a day of gratitude and remembrance, but also a day when many struggling and homeless veterans are forgotten.

According to Veterans Inc., a national organization whose mission is to end homelessness among veterans, between 529,000 and 840,000 veterans are homeless in the U.S. at some time during the year. On any given night, more than 300,000 veterans are living on the streets or in shelters. Veterans are twice as likely as other Americans to become chronically homeless. Factors contributing to veteran homelessness include lack of income due to limited education and lack of transferable skills from military to civilian life. This is especially true of younger veterans returning from Iraq and Afghanistan. Other factors include combat-related physical health and mental issues and disabilities; substance abuse problems that interfere with job retention; and weak social networks due to problems adjusting to civilian life. Mike Averiol is one of the many veterans who are struggling. Averiol served in the Vietnam War and has been homeless for a few months. He is seeking support from the U.S. Department of Veterans Affairs and is waiting for his documentation to be confirmed. He described his experiences in the 311th infantry as “brutal,” “ugly,” and “terrorizing.” After returning from war, Averiol began suffering from Post Traumatic Stress Disorder PTSD. “I witnessed a lot of things that fucked me up. We were trained to kill. I fought for seven months in Vietnam. I saw three of my closest friends killed on the same day.” Averiol doesn’t celebrate Veterans Day, but takes this opportunity to look back and honor those who have fought in the front lines.

“I fought and killed for my country, but to this day, I’m still trying to figure out why. I mean, I’m homeless along with thousands of others who have done their service. There are valid reasons to that. I can’t say I love my country; just the idea of a democratic America seems nice. For now, I’ll continue to fight the war on poverty here at home.” — Mike Averiol, Vietnam War vet “Billy,” an injured Iraq War veteran, uses a walker to help him recover from a fractured hip in Los Angeles, Calif. on November 27, 2013

Post Traumatic Stress Disorder victims are often treated with prescription drugs after coming back from the front lines. According to Veterans Inc, about 70 percent of homeless veterans suffer from substance abuse problems; 19 percent of Iraq veterans and more than 11 percent of Afghanistan veterans report a mental health problem.

Gregory Thomas, a Vietnam War veteran, has been homeless since the 1980s. He sleeps a few dozen yards away from the Arts District in Los Angeles, Calif. where gentrification has been highly effective in moving the homeless out of the area. September 14, 2014. Rodney Farmer, 63, shows his tattoo on Sept. 24, 2014 in Pomona, Calif. that he got in the military. It is a parachute jumper. “This tattoo represents who I was and what I had to do for my country,” Farmer said.

Rodney Farmer, 63, who served in Vietnam, shattered his right leg while parachute jumping during a front line operation. “One night we were 500 ft. in the air and we had to jump and land on this patch of grass. Well, I landed, but shattered my right leg. After fixing his leg, Farmer went back to the infantry and fought for the U.S. for nine years. “After nine years they told me I could no longer be in the military because half of my leg was fiberglass. I wasn’t useful anymore.” Once Farmer returned to the U.S., finding work was impossible because no one was interested in hiring him because of his fiberglass leg. He currently sleeps on the streets in Pomona, Calif. due to his injury. He receives Supplemental Security Income SSI and gets by on medical assistance from the Department of Veterans Affairs Levi, pictured on Sept. 24, 2014 in Pomona, Calif. still has shrapnel in his body, and receives no VA benefits or SSI. “Our scout team was in the front lines and a grenade went off. Shrapnel punctured my skin and entered just above my stomach. But no one gives a shit,” he said. “You’re nothing after they use you to fight – on top of that we lost.” Levi, a homeless veteran, in Pomona, Calif. on Sept. 24, 2014. Levi got his tattoos during infantry in Vietnam. “These are important to me because it tells another side of me – my past.”

There are battles that have not yet been won. Each year, soldiers come home from war and often return to a different kind of conflict. For some, it’s a struggle to survive and avoid the street life. For others, it’s a fight against drug and alchohol abuse. And for so many, it’s a battle against mental illness and physical disability. As a country, we need to confront this war here at home. On Veterans Day, let’s renew our effort to honor and take care of these men and women who have served our country.