One Week After Ferguson 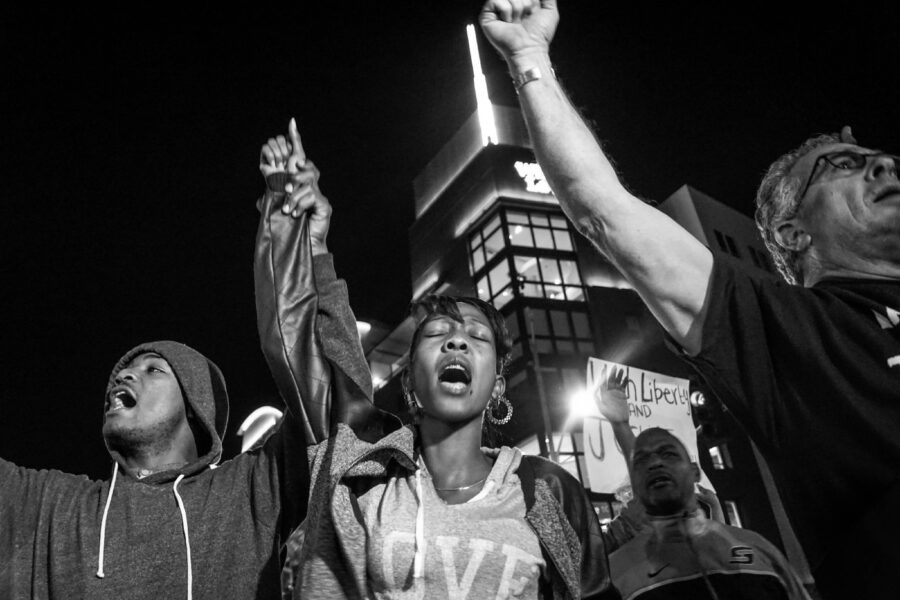 Story and photos by Pablo Unzueta

It has been one week since the grand jury in Ferguson, Mo. made its decision not to indict police officer Darren Wilson for killing unarmed teenager Michael Brown, 18. Protests commenced throughout the United States and have continued since. Close to 350 protestors were arrested in Los Angeles since the decision was announced, more than any other city including Ferguson. The following photos were taken throughout Los Angeles the week that followed.

The atmosphere was tense and optimistic in Leimert Park in South Los Angeles. There was a moment of hope that perhaps things might change for this country. People gathered waiting to hear the grand jury’s decision in hopes that officer Darren Wilson would be indicted for killing Michael Brown. The neighborhood was filled with media vans and reporters interviewing mostly African American people. Helicopters hovered in the dark sky as police patrolled on the ground.

At approximately 6:15 p.m. in St. Louis County, the prosecuting attorney, Robert McCulloch, began his news conference at a courthouse in Clayton, Mo. His speech started off with sympathy for the Brown family. That hope was short-lived. Shortly after McCulloch’s introduction, the grand jury’s decision was announced. Officer Darren Wilson would not be indicted for lack of probable cause. People cried while others prepared to march eagerly onto the streets with fury and frustration.

People marched 6.7 miles across South Los Angeles in Crenshaw, shutting down a few freeway entrances like the westbound 10 freeway, the 110, and the northbound 101. In the next few hours, protestors would block traffic, lie in the street, and attempt to take over several freeways. The Los Angeles Police Department showed restraint the first night of demonstrations.

A mother and her three children watch as protestors march on the street in Crenshaw, Calif., on Monday, Nov. 24, 2014. Protestors block traffic on Crenshaw Boulevard in Los Angeles, Calif. on Monday, Nov. 24, 2014.
Tuesday, November 25, 2014
One day after the decision

Los Angeles saw 183 arrests late Tuesday night, which was more than in Ferguson, St. Louis or Oakland, where protests were far more destructive.

Protestors and LAPD stand off near LA. Live in Downtown Los Angeles, Calif. on Tuesday, Nov. 24, 2014.

Otto Ferrous, 29, kneels down to demonstrate against police violence on Hill and Temple Streets in Los Angeles, Calif. on Tuesday, Nov., 25, 2014.

Officers dressed in riot gear prepare to move out protestors off of the Hollywood 101 freeway in Los Angeles, Calif. on Tues., Nov. 25, 2014. The department arrested 13o people Wednesday night after an “unlawful assembly” was declared in the area of Sixth Street and Hope Street in Downtown Los Angeles. Police used zip ties to cuff demonstrators before putting them on buses for transport to jail. The department’s aggressiveness led to the apprehension of peaceful bystanders and protesters, many who contend they did not hear any dispersal orders. On Thursday, protestors who were jailed were released for Thanksgiving and there were no more arrests that day. By Friday night, eight more protestors were arrested on Beverly Boulevard in Los Angeles for “failing to disperse.”

A protestor was one of nearly 200 protestors arrested on Wednesday night for “unlawful assembly” on Figueroa Street in Los Angeles, Calif. on Wednesday, Nov. 26, 2014.

Protesters are led away by police officers during a mass arrest in Downtown Los Angeles on Wednesday, Nov. 26, 2014.

On Sunday night, the Los Angeles Police Department held a prayer service at the Baptist church in South Central Los Angeles. A dozen protestors crashed the scene with a few signs opposing police brutality. They were eventually escorted out of the building by church leaders after the pastor called them the ‘devil.’ No arrests were made.