The Love/Hate relationship with LeBron James 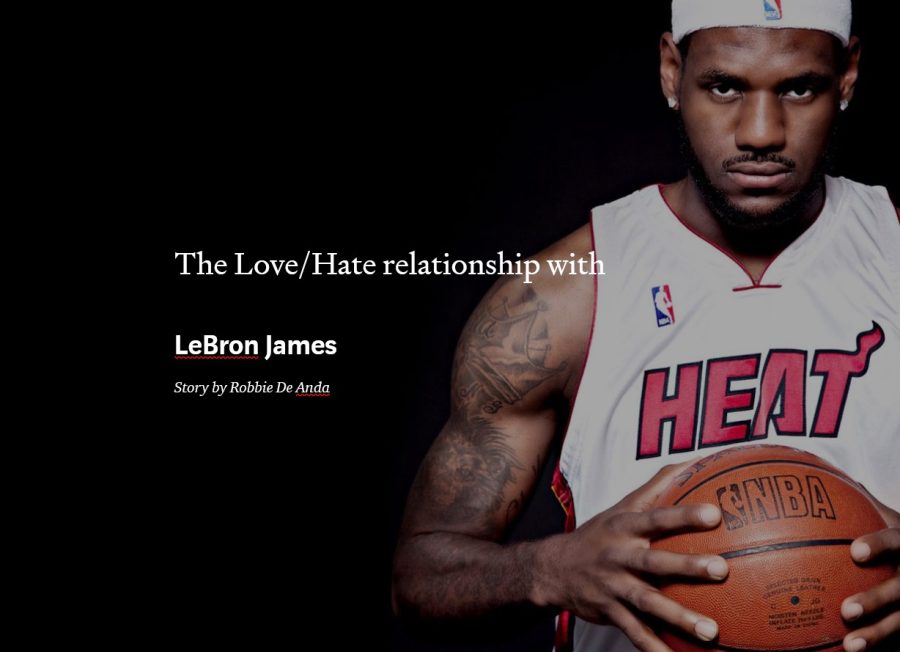 The dominant player in the NBA right now also shares the title as the most scrutinized by the media. LeBron James is a 6-foot-8-inch, 240-pound beast of an athlete that was drafted number one overall in the 2003 NBA draft by the Cleveland Cavaliers. He was thought to be the savior of basketball for his home state of Ohio. James had just graduated from St. Vincent-St. Mary High School at the time and was getting ready for a seven year journey with the Cavs. From his dominating years in high school, his first seven years with Cleveland, and an NBA championship appearance, he became known as “King James” and was Ohio’s darling. This was all until he betrayed his Cleveland roots. In 2010, James became a free agent and decided to leave Cleveland and “take his talents to South Beach.” He joined the Miami Heat for a maximum contract which according to ESPN.go.com was worth $110.1 million over the next six years. James made a smart choice. Why not play for a championship-ready team for a substantial amount of money?

So after his decision why did so many people flip the switch on their love/hate relationship with “King James?” Is it because of the Michael Jordan comparisons so early in his career or because of his hour long ESPN special titled “The Decision” simply to inform the viewers he was moving to Miami? After a four year stint with Miami, LeBron finally captured his long awaited championship ring in 2012 and then again the following year. The Miami Heat, lead by James, made an appearance in the finals last year, but lost in five games to the San Antonio Spurs in a best-of-seven game series. In the summer he decided to leave Miami and return home to Ohio to sign back with the Cavaliers, this time without the ESPN special. So maybe people flipped their switch with LeBron because he —in their opinion— outright abandoned his two NBA teams; or is it merely because he continues to tease his fans with the idea that one day he will participate in the NBA’s annual slam dunk competition?

There is no doubt in anyone’s mind that LeBron James is one of the greatest basketball players in the world right now. He will end up in the Pro Basketball Hall of Fame, but he still has his critics. In an interview with Ahmad Rashad, Michael Jordan was asked, “Kobe or LeBron?” He said LeBron is the most dominant player right now, but “championship wise… it’s Kobe.” James’ career isn’t close to being over, but a player of his caliber who garners as much media attention as he does; and with the league MVPs he’s earned, he will always be compared to players like Michael Jordan and Kobe Bryant. Bryant has five NBA championships, and Jordan has six, while LeBron at this point in his career has two to his name.

Regardless of the sport, players suit-up for every game because it brings them one step closer to standing on the championship podium at the end of the season. The majority of a player’s legacy is determined by the amount of championships they win in their career. At this point, LeBron’s association with high caliber players such as Jordan and Kobe is not justified solely based on the championship success of the other two. LeBron has a fantastic resume and is the dominant force in the league right now, but his championship victories are different than most others in past history.

Matthew Knight, a sports enthusiast, said, “It seems to me he is chasing the good players, before he had Wade and Bosh (with the Heat) and now he has Kyrie Irving and Kevin Love (with the Cavaliers).” These players have played in NBA All-Star games, meaning they were some of the best players in the league at their position. Knight added, “Every other championship team we see, it was Shaq and Kobe (Lakers), Pippen and Jordan [Bulls], Magic Johnson and Kareem (Lakers)… it’s always one and two there was never a third.”

Sure Jordan and Pippen had Denis Rodman, but he was a great defender and rebounder. Let’s be honest, he was more known for his theatrics and physical appearance than his on-court game. Kobe and Shaq also had Derick Fisher, but even he was not at the same superstar level as the other two. LeBron had two other all-pro caliber players in Chris Bosh and Dwayne Wade, the other greats won their championships primarily with their version of Batman and Robin. We can’t take LeBron’s championships away from him. He still had to survive an entire 82 game season and had to beat another championship caliber team in the finals. That alone is something we must respect. These recent championship victories have propelled him into an unparalleled stardom.

With the national attention James gets, a random fan or one of his 16.2 million Twitter followers might already believe he is the best player ever. The television commercials, shoe endorsements, and even the concert before the Cavaliers home opener this year show what a media mogul LeBron has evolved into. His Nike slogan, “We are all witnesses” perfectly represents the pedestal that the league puts LeBron on. His media popularity has become so big it has created its own gravitational pull around him. This pull has brought celebrities like Sean “P. Diddy” Combs, Drake, Jay-Z and Beyonce and many others courtside to watch LeBron at work. This type of fame will certainly bring media scrutiny as well. Whether it’s from an analyst on ESPN, or any other sports talk channel for that matter, a commentator during one of LeBron’s games, or even an everyday sports fan, people will find a reason to speculate about LeBron.

Over his career, LeBron has shot just under 50 percent from the field with an average of 27.5 points per game, averaged about seven assists a game, and just over seven rebounds per contest. His statistics are outstanding, yet he still gives sports fans and pop-culture freaks reasons to hate him. His decision to star in his own ESPN segment “The Decision” was an egotistical move. It seemed as if he was testing his stardom by bringing unnecessary attention to himself. My opinion about LeBron completely changed after his ESPN segment.

LeBron knew he was one of the most popular individuals in sports but after “The Decision,” he became a polarizing media figure. I’m sure he had no idea this would blow up in his face like it did. His Cleveland faithful started an uproar after his choice to leave his home state of Ohio. It was almost as if Batman decided to leave Gotham to fight crime in a sexier city like Miami. I’m sure riots would ensue and crime rates would skyrocket if Batman abandoned Gotham similar to LeBron leaving Cleveland.

After the first two years of LeBron leaving Cleveland, the city had the most reported burglaries occur in Cleveland since 1991. Immediately after his televised decision to move to Miami he became the villain of Ohio. Fans were shown on the news burning his jersey with people huddled around shouting hateful phrases about their supposed hero’s flame-covered jersey. When asked about the decision to hold his ESPN segment, why did people’s opinion change about LeBron, Rueben Towns, a sports fanatic and LeBron fan since his Cleveland days, said, “Are we looking at LeBron from a media standpoint or are we looking at him as a basketball player?” This question holds quite a bit of validity.

If we are looking at him purely from a basketball standpoint, everyone would be a fan because his game is unstoppable at times. However, with the media accessibility today and the prevalence of social media, sports viewers are bombarded with talk and controversy over the star players of all sports, so it is almost impossible to view these players purely based on performance.

The performance everyone wants to see regardless of their feelings toward LeBron is to see him test his freakish athleticism by flying high in the annual NBA Slam Dunk Contest. There aren’t many players in the league who can change the momentum of a game with one rim shattering tomahawk dunk quite like LeBron James. It seems every year during February, we see King James during All-Star Week entertained by the slam dunk competitors as they put on a show for the fans and viewers at home. LeBron has released videos at practice or during his pre-game warm up of his monstrous dunking potential, but these high flying videos remain a tease to the fans.

In an article on SI.com Ben Golliver wrote that in 2010 LeBron committed to participating in the dunk contest that year but pulled out of the contest just before its start. These teasers are heartbreaking to the normal NBA fan, but to the fans who understand the history behind the slam dunk contest, it’s disrespectful. All of the greats like Clyde “The Glide” Drexler, Vince Carter, Julius Erving, Dominique Wilkins, Kobe Bryant, and yes, the G.O.A.T. Michael Jordan have all participated in the dunk contest. Whether it was for the fans or to prove they were the superior dunkers in the league, these players left that performance not only for the dunk contest history books, but also their individual legacy. LeBron has won a championship, gone to All-Star games and has been named first team All-Pro. There really isn’t much more he can pile onto his legacy other than finally winning a dunk contest. In 2013, Hall of Famer Earvin “Magic” Johnson offered $1 million to LeBron, or anyone who could defeat him in the 2014 slam dunk contest. Once again, LeBron declined participation slightly dampening his legacy.

LeBron still has the ability to improve his legacy by finally bringing a championship to Cleveland. LeBron’s time in Miami was a maturing stage. Towns explained: “He had to go to college, he had to establish himself… now he’s back home ready to take care of business.”

LeBron spent four years in Miami similar to what most collegiate athletes spend at their alma mater. In Miami, he matured and won a couple of championships so it will be interesting to see if his experience will rub off on players like Kevin Love and Kyrie Irving who have never played in a playoff game. LeBron only signed a two year deal, so what happens if Cleveland doesn’t start winning immediately? Isai Rocha, WCBSports editor, said, “It would be pretty crazy if he went somewhere else after those two years. I mean it’s tough to build a competitive team in a couple years.”

LeBron has finally returned home with multiple championship rings, but he won’t be completely satisfied with his career until he finally brings a championship to his home state of Ohio. Throughout his career many opinions have been formed around LeBron, but like him or not, King James is the dominant presence in basketball.