Misogyny in the gaming industry reaches far beyond Nintendo. 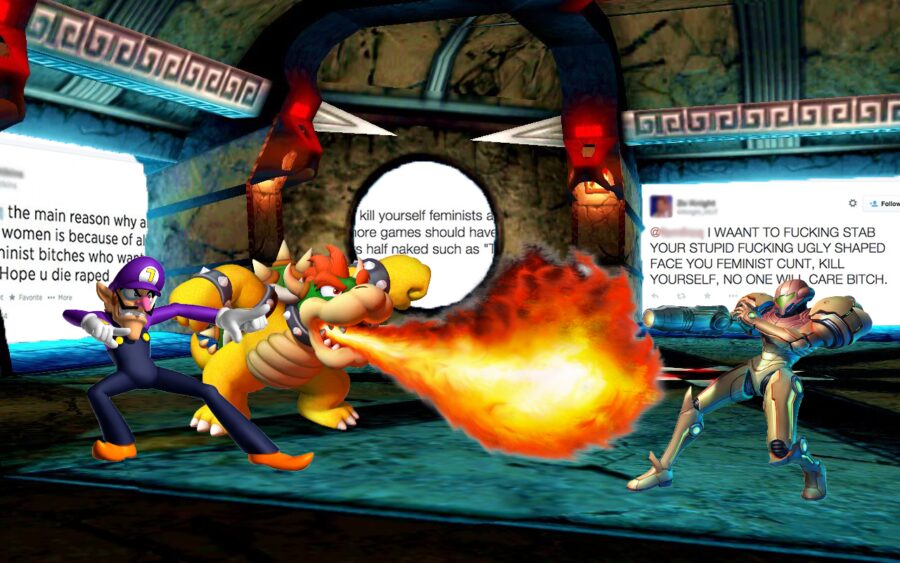 Let’s begin this conversation with a disclaimer: I do not self-identify as a gamer. I am classified by the gaming industry as a casual gamer. Quite honestly, even that label seems pretty generous for my usage. Whether it’s waiting for a flight, spare time between semesters or when spending time with my boyfriend, gaming is something I feel like I can easily pick up and set down.

The air buzzed and snapped as a pack of journalists made their way into the electric and dense streets of downtown San Francisco. The group scurried to a developing corner of the Tenderloin district in mid-February, eager for the news to share with adoring, absorbent readers.

As a curious peer and intrigued enthusiast among them, I prepared a watchful eye to better understand what these gaming press events were all about. If I were’/’ going to start consuming mass amounts of interactive media, I was going to have to sample the culture adjacent to these fancy-ass hors d’ouevre platters.

Press events like these tend to be a hot spot for new game reveals, interviews, and networking. My boyfriend was among the journalists; badges swinging about their necks, the VIPs waiting to be impressed by the circling reps of Nippon Ichi Software America. The hosts of the evening seemed jubilant and rosy-cheeked, sporting near cosplay-like garb to draw in the gazes of all those who were meandering about.

After separating from my cohorts, I settled an elbow on the bar and primed myself for some serious people-watching. As I lounged with complimentary carrot sticks in hand, my ears perked up for audible conversations nearby. Exchanges were mostly variant flavors of “what will they do next,” until the booming J-Pop music cascaded over the audience.

As the crowd gathered around the makeshift open-mic stage, I heard a frustrated murmur to my right. A petite gal, about 5’1’’, exasperated, “Man, I can’t see over all these people.”

A tall, bleach-haired male next to her offered, “You can sit on my shoulders for a better view…but the other way.”

Her face paled into a mix of shock and embarrassment, as the chlorine-soaked mega-creep received congratulatory high-fives from his minions. My excitement and glee were instantly pile-driven by a scarlet rage.

Stomping away in a fury, I steeled myself to report this guy to someone — there had to be quality control for humanity nearby, right?!

But the closest satisfaction I found to this was breaking up the networking of my boyfriend and pals. I insisted that this had to be a rarity, but they all shook their heads in mutual sorrow and shame. They explained, in hushed tones, that this was actually a very common and embarrassing part of their work.

Armed with their support, I decided to be the surveying fly-on-the-wall and tally as many comments as necessary to prove that this instance was merely an outlier. There couldn’t be more assholes, like Bleach-Blonde Guy, floating around unnoticed, or worse, tolerated. Collectively however, we heard several strong, colorful, sexist comments.

“Wish there was more talent here tonight… when are the girls [journalists] gonna start putting more effort into their appearances?”
“I would give her mad XP [Experience points] if she would just come here and tug me off.”
“Did you see her tits? Mmm. [Masturbatory gesture]”

Others like these came later, and the more we tried to measure the crude statistics being displayed around the room, we realized that the public relations team was playing a part in it as well.

The young and bouncy female MC, who closed off the event, announced, “If you guys have any question regarding any of our announcements or…want to know what we are up to tonight, ask away!” As if to speak for every woman in the room that flirtatious advances were welcome.

Keep in mind most of the PR team were cosplay-adorned ladies. Brightly colored wigs could not distracted from the knee-high stockings and short dresses that frolicked about. PR had spared no expense; including the cost of their female employees’ dignities.

As the demonstration came to an end, the mingling resumed and I made a beeline straight for the bar. Fueled by manic ire, I demanded a sugary-neon-themed drink from the barkeep in an attempt to drown this newly acquired knowledge.

Lightweight that I am, it did not take many of these drinks before I began seeing two of my boyfriend. My comrades attempted to cheer me up by reminding me that by tomorrow we would be enjoying San Franciscan cuisine, putting this night behind us.

Upon our attempt to exit the hip, chromatic lounge, the queen bee/host tugged and pleaded with the gents of the group to come back in and please have a shot on her.

Even with my tequila-soaked mind, I fumed at her eye-batting and high-pitched flirtations.

Finally, the night wound down and my mates skipped arm-in-arm to the station. But the suspicion of bigger issues nagged at my brain as we swayed home in the iron belly of a public bus.

While quite a shock to me, I knew that one night of bad experiences shouldn’t ever be a barometer of a culture’s values. Armed with a voracious mind and fast fingers, I began my dungeon crawl to find answers.

Based on numbers and cold hard cash, gaming is by far the fastest growing and most lucrative sector in the entertainment industry. According to The Quarterly Global Games Market Update from Newzoo, mobile gaming alone saw profits nearly double in the last few years, hauling in $25 billion in profits in 2014… that’s about the gross domestic product of Ecuador being spent on just mobile games.

These figures won’t be slowing down anytime soon. However, these demographics are full of untapped potential. Newzoo also conducted a study in which it was discovered that 48 percent of America’s gamers are female. Though this suggests an even gender split, males aged 18–25 are the group that game developers focus on.

Over the past decade, consistent studies have shown that female characters make up only 15 percent of video game protagonists. Even the leading ladies who are present tend to be hyper-sexualized while lacking complex character development.

So why does this shift in demographics seem to be going unnoticed? Two reasons: fear of change, and stifled voices. A specific campaign that shall not be named are the most prolific group against a paradigm shift towards inclusion. They masquerade this true cause behind a desire to have more transparency from game journalists. Women in gaming journalism are already in a constant flux of scrutiny, and are the primary targets of these sexist barbarians.

Harassers are playing an ironic game. Their attempts at trying to keep gaming a boy’s club to maintain the status quo are severely stunting the growth of the industry. It is essential for media to evolve and reflect all types of participants. These people are damaging the industry they think they’re trying to preserve, and they are actually validating the perversions that people see from the outside. While this campaign is relatively new, this harassment is hard-wired into gaming culture, internalized by most women but expressed by only a few.

Upper-echelon game writers such as Leigh Alexander, Maddy Myers, and video essayist and critic Anita Sarkeesian have discussed this cultural climate at length. Myers recalls a specific incident on her blog Metroidpolitan, where she was physically harassed at a convention. Myers writes that the extra tension and anxiety take a huge toll. “Some days I do sit there and take [abuse] because I just don’t have the energy for an argument with a stranger. Some days I’m not so ‘strong,’ I guess. I wish I didn’t always need to be.”

*TR, a female journalist, said it is looked down upon in the gaming industry to be seen as a stereotypical gamer girl:

“Women constantly need to qualify their gaming credibility, proving that they are not a ‘Gamer Gurl’ and that they actually know what they are talking about. Why is that? You don’t see people saying ‘I like movies. I’ve been a movie watcher since I was old enough to sit upright on my own.’”

This constant questioning of integrity can be exhaustive and wear down the most committed players and critics.

Another journalist, *Andrea S., quit writing for a year due to the constant onslaught of social media hostility. It was nothing new to her, as she had been introduced to it at the age of 17 as a budding YouTube contributor, wishing only to express her love for and opinion on games. She eventually moved onto freelancing for more traditional game outlets, but was constantly objectified and called “doll” or “baby” as pet names by her editors. Fearing the risk of losing her position by confronting her colleges, she instead slowly withdrew from the community.

“I found the courage to get involved again through the help of a friend…but recently it all became about “how do you feel about being a woman [in gaming]?… suddenly I didn’t want to write anymore and my output gradually decreased…because I didn’t want to release anything in this hostile environment.”

However, these women want to be known as more than just victims and whistle blowers. Critics like Alexander have taken a stand by saying some women in the industry are fatigued, constantly sharing stories of sexist strife. In her piece, “All the women I know in video games are tired,” Alexander offers that women have essential perspectives on gaming and are not just the recipients of harassment.

Whitney Chavis, an owner of the gaming fan site Silent Hill Historical Society and current Guinness World Record holder of Silent Hill memorabilia, should be certified as a top-tier horror gaming consumer. However, all her credentials went out the window when she used to purchase content from her local game stores.

Chavis said, “Employees would give me a weird look and ask if I knew the content of the M (mature) rating I was buying…I usually smile and say I’m well aware…I do often wonder though why I get the second degree when my brother never seemed to.”

In an obvious “take my money!” scenario, women are pigeon-holed into what content they are allowed to like. In an article published by BBC Technology, developers state that because the majority of its’ employees are males and because of economic reasons, the majority of narratives remain heterosexual male experiences. This negative feedback loop is attributed by critics like Sarkeesian as part of the perpetual re-spawning of sexist interactive media portrayals.

The thread that connects these stories weaves a garment of hate showing that the industry at large remains reactive instead of proactive. Gaming should not want to dress itself in these exclusionary robes. Regardless of how profitable these shifting demographics may be, headlining developers fear losing their well secured fan bases.

They hold power and sway that could change social constructs in gaming culture, but instead perpetuate the present state of affairs. That this conversation is more prevalent today than it was five years ago shows progress, but women should not be fed scraps and be told that they’re full.

First and last names were not used in order to protect the privacy and safety of the sources.