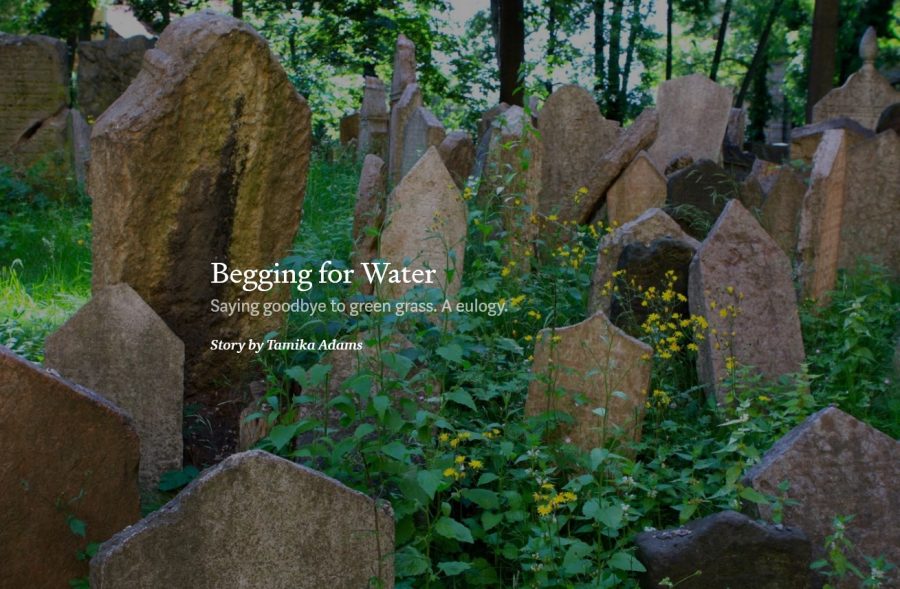 Tamika Adams
“Here you lay, once magnanimous, now dormant. You sleep, ready for a second life that may never come. The demise of the lawn ushers in a new wave of landscaping.”
Political, business, and societal communities are reluctant to see you sever ties with this mortal soil. More than 155 communities in 36 states bare the name “lawn” as part of their moniker.
They’ve become obsessed with maintaining your image, fooling themselves into thinking that it reflected more than your physical embodiment. That somehow you transcended the corporeal world, and became a symbol for their wealth and independence.
We toiled to keep up your appearances but to our own detriment. Science and money were spent to liken you to your ancestors but your façade was clear. You were never meant for this land. We will go golden by letting you pass out of our lives and embracing more natural alternatives.
May you be fondly forgotten.

With the draining menace put to rest, it behooves the public to see what lies ahead for the new renaissance in landscaping. The movement to evolve the former green spaces in California is growing stronger, most notably the one outside your front door. The call to action has been heralded from social institutions to all Californians to forgo this long held obsession for the sprawling emerald lawn and save water.

Getting with the times, California began offering incentives for its residents to make the eco-friendly switch to drought tolerant landscaping. Unfortunately, just like the water so desperately needed, these funds have also dried up.

The Metropolitan Water District of Southern California announced earlier this month that it will stop accepting rebate applications from people who rip out turf lawns in favor of low-water-use landscaping.

“We knew that the popularity of the turf program would exhaust the available funds at some point, but even we didn’t predict just how popular turf rebates would become,” MWD General Manager Jeffrey Kightlinger said in a written statement to NBC at the beginning of the month. The funds were estimated to last till the end of the year, but the money ran out like hot cakes… Or just like someone handing out free money.

On the rebound, Gov. Jerry Brown announced last week that counties and cities will be prohibited from issuing fines for lawns going brown in the condition of a drought. The measure, by Assemblywoman Cheryl Brown who represents the 47th District of San Bernandino County in Southern California, prohibits local governments from issuing violations of “lawn maintenance” ordinances when declared as a state of emergency.

Furthermore, statewide campaigns sponsored by municipal and local agencies are asking that residents “Go Gold.” They encourage the public to go water-wise and let their lawns to go dormant for the summer months. Agencies like the Save Our Water Program, California’s official statewide water conservation education group, are spiking lawns across counties with signs that proclaim, “Gold is the new green.” Beyond these organizations, support from the private industry is sprouting up all around.

Efforts can be seen in other branches to support conservation. For instance, in the city of Ventura, radio station 103.3 The Vibe, is currently holding a contest for listeners — send in and post photos on social media of gold lawns to enter for a $1,000 shopping spree with a local jeweler. Participants from surrounding counties are also encouraged to enter and the winners will be announced at the Golden Lawn Conservation Expo on August 29th. Public broadcasting lends a voice to the effort as well, by sponsoring local NPR stations with promos to let your lawn “fade to gold.” And up north has taken action with the “Brown is the new Green” campaign launched by San Francisco’s Public Utilities Commission.

Alternatives to the golden philosophy are out there. Viable options for any anxious proprietor range from pretty pennies to logical cents.

Famously used on arena fields, synthetic grass, or Astroturf, is becoming an increasingly popular choice for homeowners, from coast to coast. This is a costly option but it does provide the fake green to those unwilling to let go of their traditional grasslands. Second tier on cost, native plants provide a no-brainer solution. They are adapted to the local climate and require little or no watering to thrive. Duh! It’s so simple!

And if the least amount of effort and expense is desired, rockscaping or groundcover are up that particular avenue. From soft mosses to wanted weeds, some of these locally-sourced plants are even allergy-free. And boy howdy! It’s like walking on carpet! Throw in some sand and a giant rock… Boom! Zen garden to work out all that drought stress.

Let’s recap: California is in the fourth year of a catastrophic drought that has led the state to issue a series of steps to reduce water consumption, including the first-ever mandatory cutbacks in urban water use.

Water conservation is a huge deal — but, this challenge has created an opportunity. Brent Haddad, director of the Center for Integrated Water Research at University of California at Santa Cruz, told the Los Angeles Times earlier this month, “We’re developing a new aesthetic for open space in California and moving away from the ideal of the green grasses of Kentucky.” This could be a facelift for California and not in the way outsiders expect– a chance to re-brand as the glamorous desert oasis of days gone by.