“You’re So Beautiful!” Umm…Actually my makeup is beautiful. I’m still the same. 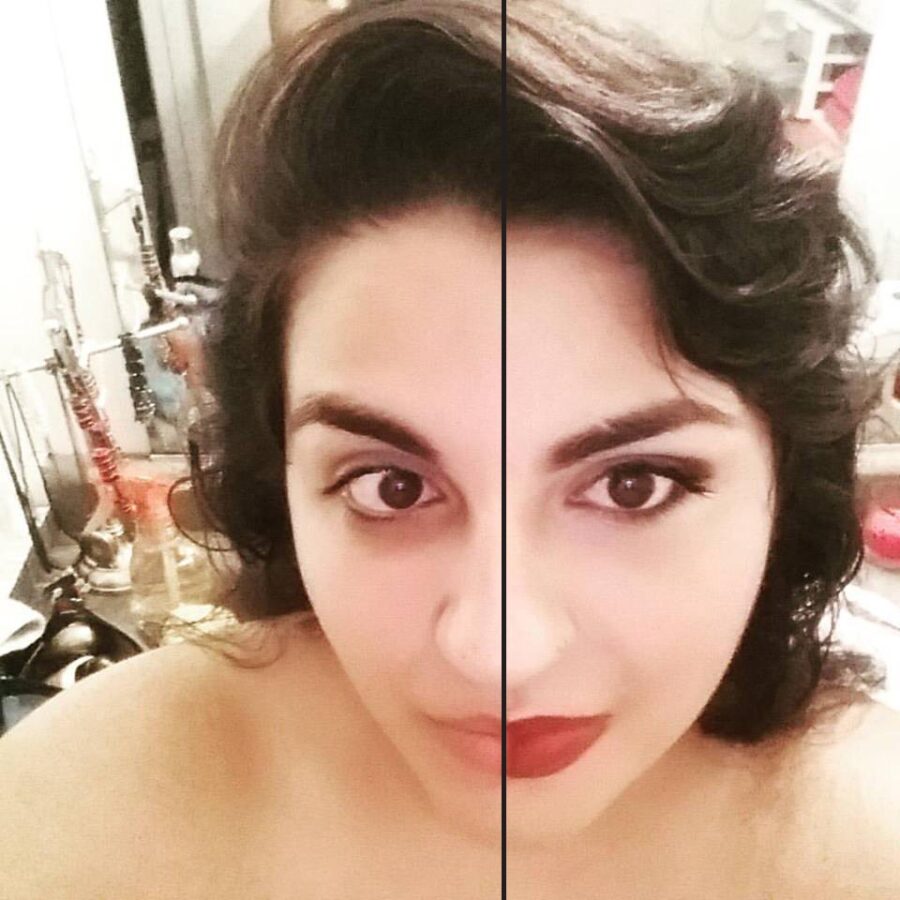 Over the years of going primarily au-natural, I stood on the sidelines and watched as my female friends transitioned through the different stages of makeup-hood: from the first swipe of lip color to full-on glamour. As they learned how to give themselves the “natural look” in my bedroom mirror, I rolled my eyes at the irony of adding artificial products to look “natural,” and shoved my still-bare face into the latest Harry Potter novel, convinced that applying makeup was stupid and juvenile.

For years, I continued to feel that way: unimpressed and somewhat annoyed by all of the times I had to accompany a girlfriend into the bathroom so she could check her lipstick or make sure her forehead wasn’t shiny. I felt like I had had my face plastered and painted, every time one of my friends took my bare face as their next act of charity, and proceeded to give me a make-over. For the most part, I always wondered why anyone would want to waste hours of their lives painting their faces in order to achieve the plastic-y look of a doll.

“You are a human, not an anatomically incorrect toy,” I wanted to shout.

My non-interest in cosmetics probably stemmed from growing up in a household that had never heavily encouraged, or even really talked about, them. My mother has never worn much makeup, so I grew up without a made-up influence or go-to instructor who could address my curiosities with the strange beige powders, face-crayons, or tubes of color I watched my friends obsessively collect.

Eventually as I matured, my annoyance with cosmetics dulled, and I began to see the appeal of putting the products on. Slowly, my own interest, in what I had come to see as an art form, began to build.

After nearly 23 years of steering clear from the stuff, I began to consider the possibility of applying more than the eyeliner and lip stick that I had moderately familiarized myself with in order to be “presentable” among the sea of gorgeous girls present in Southern California.

With the mystical fairy-godmothers of YouTube and Pinterest as my guides, I plunged headfirst into the world of makeup. I watched countless videos, read numerous articles, and pinned dozens of makeup tutorial pins before finally feeling satisfied that I had caught up with years of cosmetic progress. Armed with a long list of the necessary products I would need, I walked into the brightly lit cosmetics department of my local Target Store.

I can only imagine how much I would have spent at ULTA or Sephora, because I walked out from Target’s crimson doors with a single bag and over $100 emptied from my bank account. I assured myself and my debit card, that we would probably be returning it all anyway.

The following day, I applied all of my newly purchased products: face primer, eye lid primer, eye shadow, foundation, compact, bronzer, contour crayon, blush, eye pencil, liquid eye liner, mascara, lip primer, lip liner, lip stain… all of this tacking on an extra hour and a half to my normal 15 minute morning routine. If this was what it took to put on a pretty face, I wasn’t sure I could manage this on a daily basis.

However, when I entered my first class, and a friend of mine walked right by me before having to turn around and take another look, I realized that it may not have been a complete waste of my time after all.

“Oh. My. God! I didn’t even recognize you! You look freaking gorgeous!”

Apparently Makeup Face, what I like to call the layers of product between my actual face and the world, is surprisingly attractive. The slew of compliments seemed unending.

I was hit on and flirted with by more people in the past few months than ever in my life. Suddenly men, and not just creepy old guys, but men my own age, some even incredibly attractive, were noticing me.

I’d never found myself to be anything more than average in the looks department; a characteristic I accepted after assuring myself that being intelligent was more important than being pretty. But I have to admit, having experienced what it feels like to have people flock to you and complement you non-stop, I can understand the obvious draw. I may have never brought in many suitors, but Makeup Face, Makeup Face brought in a ton. However, even while I was enjoying this new influx of flattery, I still couldn’t help but see the uglier side of my now “pretty” face.

When young girls complimented my skin in awe of how flawless it appeared, I wanted to tell them that it wasn’t real; that it was just the makeup I had on. And it wasn’t just my skin. My lips were perfectly shaped, my eyes, gorgeous. Even my freaking cheekbones had somehow become better than before.

That is, until temperatures skyrocketed over 110 degrees, and there was no way I was about to spend hours applying makeup only to have it melt away within minutes under the rays of a burning sun.

It wasn’t until that first day Makeup Face was forced to stay home and I stepped back out into the world, that I realized just how drastically putting on my “face” had changed the way people saw me.

Instead of a variation of the normal compliments I had rapidly grown used to hearing, I got, “You look so tired, are you not sleeping?” or “Oh my god, are you sick?” and my favorite, “Whoa…rough night?”

The first few times Makeup Face was absent only encouraged me to wear makeup more often. Granted, I enjoyed the compliments I received when I did, but more than that, I hated feeling like I looked like crap when I didn’t.

I began to wonder why everyone was so much more interested in Makeup Face, and for that matter, whether the difference between my face and Makeup face was so drastic that people actually thought I was sick when I wasn’t wearing makeup.

Which made me a tad peeved, if I’m going to be honest. I was not about to regress into the insecure teenage version of myself over Makeup Face. Clearly the reactions to both my actual face and Makeup Face had left me a little off-balanced, but having recently experienced both, I saw past my now insecure, if “perfect,” reflection and tried to take a deeper look.

I recognized the obvious benefits of people finding me attractive; the truth was, people treated Makeup face much better than they treated me. This isn’t to say that people were suddenly outright rude to me when I didn’t have makeup on, but they definitely didn’t notice me in the same way they did when I was.

Doors opened for Makeup Face. Like, literally every door was held open for her. Makeup Face was allowed to go first in line, given the best guest service, and did not, not even once, have to ask for a refill. Makeup Face was noticeably treated better, by strangers, than I had ever been.

Which made me realize, all of the outstanding treatment I had received was contingent on my having put on a pretty face; the price of which was accepting the slew of unrealistic beauty standards that came with it.

A professor once told me, “Gender is something we put on every morning. We are who we dress ourselves to be before leaving our homes. This is how we identify; this is how we want the world to see us.”

In that case, the average male person gets to wake up in the morning with the face that they are going to leave their houses with, but I, and other women, have to spend hours putting on our faces, before being acceptable. The face we wake up with, isn’t good enough to show the world, not without makeup.

At least, that’s what society is telling us. We are molding society’s women from the time that they are young, and given a barbie instead of a Lego set, to fit the socially accepted standards of beauty. Every compliment I received was nothing more than a positive sanction to reinforce that I had done well to follow the standards, every question of concern when I hadn’t, a negative sanction subliminally telling me that I should try harder to fit the mold.

Needless to say, the reactions to my before-and-after face had left me with an entirely new perspective on wearing makeup, and I’m not the only one.

Recent movements have been made via social media platforms like Twitter, Instagram, Facebook, and YouTube that encourage women to push for a reality check when it comes to judging either their bare or made-up faces. Tagged with the hashtags #HalfMakeup or #HalfMakeupFace, images and videos of women showing what their faces look like with and without makeup have surfaced and garnered the attention of mainstream media. The idea behind these movements being a joint effort to reassess the importance placed on beauty, and to unite under the notion that it is important to accept our faces as beautiful with or without makeup on.

As more and more women recognize how unrealistic the beauty standards are according to society, and lets be honest, as set by the advertising and film industries, the argument for less makeup is becoming just as strong as the one advocating for it.

Which is an excellent start to the much bigger battles that lie ahead. Recognizing a problem, and actually fixing that problem are two entirely different things. Right now, our society is coming to terms with these issues, but we have only really just scratched the surface. Little girls are still being encouraged to paint their faces, even though they still maintain the “youthful” glow women pay thousands of dollars, on the same cosmetic products, to achieve.

It was probably easier for me to recognize the uglier aspects of attempting perfection because I had already matured into my own person before using makeup. This is not to say that girls who grow up using makeup are less mature, but it does create a difference in experiences.

Many of my friends have had to readjust and reacquaint themselves with their bare faces, and confront their very real fears of running errands without their “face” on. Meanwhile, I’m completely comfortable with my own face, but still struggling with the consequences that come with Makeup Face.

The goal for both of us, I think, is to end up happy with both sides. But more importantly, to lead the example for young girls to do the same, in the hopes that one day they can enter the world with the faces they wake up with, instead of the ones that they are forced by society to put on.