“What Happens to Us in the Future?”

“Do we become assholes or something?” 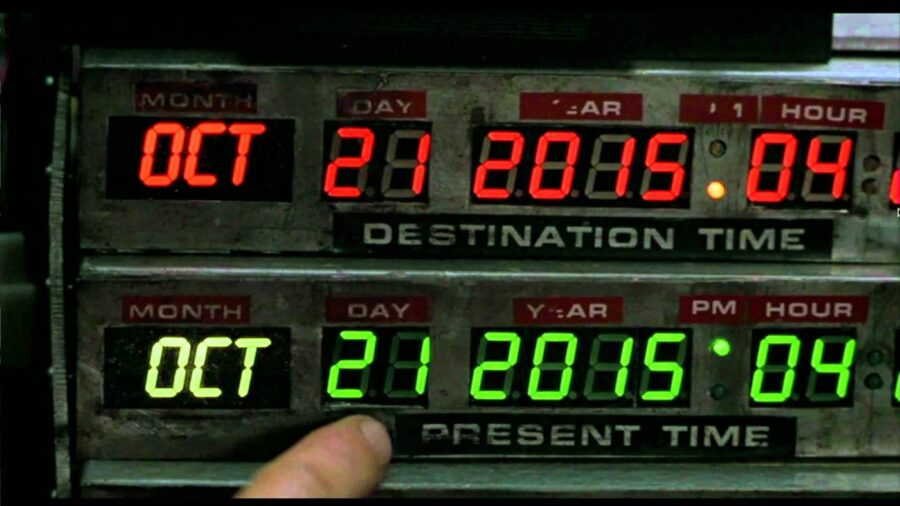 It’s finally here. It took 30 years, but we’ve finally made it. Oct. 21, 2015: The day when Marty McFly, Doc Brown and Jennifer Parker arrived in their flying DeLorean to the Hill Valley of the future.

That future is today. How does it feel?

When Marty McFly is told he must leave the new 1985 he just returned to, and go to the future, he asks Doc Brown, “What happens to us in the future? Do we become assholes or something?” Which is now a valid question: in our 2015, have we become assholes? Let’s take a moment, where instead of wondering why we don’t have flying cars, we actually look at the future we are currently living in.

In the last 30 years, creative minds have focused primarily on the technology of communication resulting in a future that has people universally interconnected and disconnected at the same time. What the storytellers of Back to the Future: Part II missed was the invention and importance of personal computers and the handheld devices that have given us the answers to every question, concern, or need.

These tiny rectangles are so powerful, individualized, and uniquely ours that they seem to require our constant attention. To credit the imaginative minds of the past, we do get glimpses of something that resembles Google Glass in the film’s future, and it does appear to have the capabilities of a telephone, but doesn’t seem to take away the focus of looking up and around at each other and their surroundings. The different timelines throughout the Back to the Future trilogy focus on behavior, how we treat one another and clearly demonstrates how a single moment has the capability of changing everything. As we travel from the 1880s to the 1950s to the 1980s and on to 2015, there is a fragile balance between opposites: corruption and hope, justice and immorality, innocence and greed. In contrast to the recklessness of the Wild West, there is a simplicity to the 1950s Back to the Future, where time has yet to have sped up. Before Vietnam and before the unrest of future decades, there was a post-war optimism that has yet to be repeated. One of which is still incredibly appealing to present day audiences. This idealism shows an American Dream where people are attentive to each other, both in social situations and occupational circumstances. Even the level of service common in this time period is startling to 1985 Marty as he tries to adapt to the 1955 Hill Valley.

As the current members of this “futuristic” society, there is no turning back to our simple-minded past. There is no flux capacitor in our DeLorean, but we do have a place where we “don’t need roads.” Ours is lovingly called the information highway, where our society has found itself facing our own intersection.

Communication technology has evolved so rapidly that our society is currently struggling to evolve with it. What’s been created in our 2015 has simultaneously been a fantastic way of connecting individuals together while also being a device that enforces ignorance, anonymous hatred, and does it’s best to eliminate the need for actual face-to-face interactions.

In our 2015, Biff’s grandson Griff would most certainly have a 4chan account. Yet at the same time, our access to a global connection, has given us an opportunity to further develop our humanity, compassion, and a willingness to accept each other in order to change the world for the better.

As seen in the Back to the Future trilogy, bad behavior bred bad behavior, good bred good, and the rest of Hill Valley residents fell somewhere in the middle. Just like it in our reality. There are generations of people trying to better themselves, stuck in a pattern of monotony, or frightened into vile behavior. Even without portraying personal technology, Back to the Future accurately depicted a society with aspects of kindness, intelligence, ignorance, and cruelty. So yeah, we don’t have flying cars, Pepsi isn’t quite that pricey, and we are waiting on a few Jaws sequels. But flying cars really aren’t all that practical, inflation, thankfully hasn’t gotten that bad, and we are getting enough new Star Wars movies to fill the void left by the lack of Jaws sequels. Despite the differences in our Oct. 21, 2015 from the one in Back to the Future, we share a similar crossroad of hope and fear that will always be present in the world. Our challenge is to decide together what path we are going to follow in order to reach 88 miles per hour.

Then again, one has to wonder…have we entered into the alternate 2015 where this happens? Great Scott! I sincerely hope not. That would be way too heavy.