#PrayForParis…But Not the Middle East

How the Western world mourns tragedy, only if it affects people with privilege. 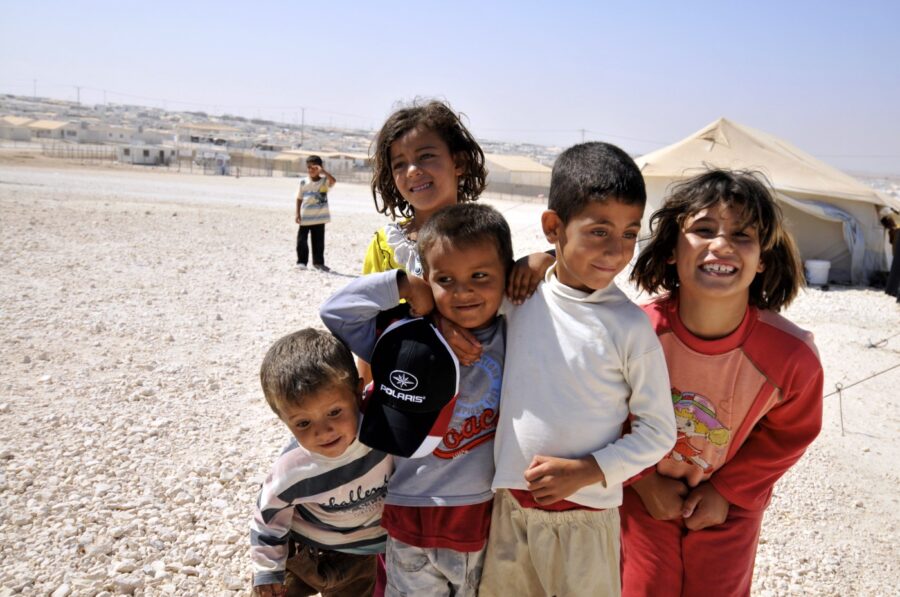 Talin Hakopyan
Children in Zaatari, a refugee camp in Jordan.

Privilege is waking up in the morning covered in fluffy blankets and the smell of freshly brewed coffee lingering in the air. Privilege is being able to wake up next to my best friends. Privilege is the feeling of safety.

On the morning of Nov. 13, I spent my morning disregarding my privilege. A friend of mine flew across the country and into Los Angeles airport the night before, and together we would be attending Justin Bieber’s album launch at the Staples Center. Our plans for the hours before the launch were simple: drive down the streets of Melrose and Sunset Boulevard blasting One Direction’s latest album and go to the best vegan restaurant in L.A. It wasn’t overly ambitious, but I was excited to experience this carefree day fueled by the spontaneity of our youth. Having friends all over the country is a blessing and a curse at times since we’re so far apart, but I was going to cherish every second of her time here.

Before we left for West Hollywood, I checked Twitter, as is my habit, and saw that Harry Styles had tweeted.

Thinking of everyone in Paris.

At first, I was confused, what had happened in Paris? Curious, I refreshed my Twitter app, and watched as my feed instantly filled with news about a series of coordinated terrorist attacks in Paris, France.

As the news continued to file in and videos of these events began to surface, I tried to gather as much information as I could on the attacks and where they were happening. I remember that sometime during my intense search for information, I received a notification from FotMob, an app that helps me keep track of what’s happening in the soccer world. It alerted all of its users that three suicide bombers had also struck near the Stade de France in what appeared to be an attempted attack on the thousands of people, including President Francois Hollande, attending the soccer game between France and Germany.

As I scrolled through the hundreds of tweets that continued to pile in, I learned that there had been nearly simultaneous attacks at several cafe’s and that hostages had been held and killed at The Bataclan Theater, where American rock band Eagles of Death Metal were performing a show.

By the time we had gotten on the 101 freeway toward Los Angeles, a total of 129 people had been murdered and 368 were injured, 80–99 of the 386 suffered serious injuries.

From 5,642 miles away, I felt an indescribable grief as though, despite the distance, I was there on the streets of Paris. It felt as though I was experiencing what thousands of Parisians were as they ran wildly through the city searching for shelter from these brutal and gruesome attacks. But I wasn’t on the streets of Paris. I wasn’t under attack. I was sipping an iced vanilla latte with almond milk and an extra shot of espresso from Alfred’s Coffee and seeing what geo-filters were available on Snapchat for the area I was in. I, a 20-year-old Armenian-American female living in the United States, have never dealt with anything like what others around the world deal with on a day-to-day basis.

I am privileged and I understand that.

Within an hour, tweets and posts began responding to the terrible events that had occurred. People sent prayers and support to Paris and changed their profile pictures on social media to the colors of the French flag — blue, white and red. The hashtag #PrayForParis captioned photos, usually of the Eiffel Tower from people’s vacations, followed by thoughtful messages. Outside of the social networks, many international landmarks were lit with France’s colors as a sign of the world’s shared loss and a symbol of solidarity with France.

Parisians opened their homes to those who needed a safe place to stay, even using social media to spread the word, with the hashtag, #porteouvere. In addition, Facebook activated a “Safety Check” feature allowing Parisians or others visiting Paris to “check in,” telling their family and friends that they were safe.

As I sat in the Real Food Daily on La Cienega Boulevard, I checked into Buzzfeed News to see the plethora of articles about Paris. But as I continued to scroll I also found a few articles about Beirut, Syria, Baghdad, Mexico and Japan. I soon realized that all of these places had also experienced bombings, shootings or natural disasters that day. But as the world’s eye had spotlighted the events in Paris, these tragedies, equally as devastating, had been all but ignored.

As Justin Bieber held a moment of silence in honor of Paris, I was using the Staples Center’s wifi to shuffle through the superfluity of posts about Paris to find the few articles that reported these other global disasters. As I read through the tweets describing the panic in Paris, I took a second to thank God that I lived in the suburbs outside of Los Angeles in a nice home with a loving family where I felt safe at all times.

As more and more reports came in from Paris, and little to nothing was still being written in response to these other, equally important events, I realized that something had shifted my view of the world.

While the world showed a great amount of solidarity for this westernized, predominately white country, we were all but blind toward quotidian catastrophes happening in several non-Westernized, non-white countries. From my fantastic seat inside one of the grandest arenas in the state, I suddenly saw the lack of empathy given to all non-Western countries.

Perhaps seeing Paris go down in turmoil and witnessing the lights of the Eiffel Tower be shut off hit home for us, Americans. Paris after all is much more familiar to us than Beirut.

It is the “City of Love.” It’s where Mr. Big followed Carrie Bradshaw and expressed his love for her in “Sex and the City.” It’s where a poet, Christian, fell for a courtesan, Satine, in “Moulin Rouge” and it’s where a rat named Remy befriended a young kitchen worker in “Ratatouille.”

It was certainly a popular vacation spot, judging from the amount of photos I saw on my personal Instagram account of people smiling in front of the Eiffel Tower, The Louvre, and the Arc de Triomphe.

Lebanese doctor, Elie Fares, wrote in a blog post, “When my people died, no country bothered to light up its landmarks in the colors of Lebanon’s flag.”

“When my people died, they did not send the world into mourning. Their death was but an irrelevant fleck along the international news cycle, something that happens in THOSE parts of the world.”

In general, there is a lack of knowledge about non-Western countries. Our privilege, especially as Americans, blinds us from educating ourselves about Middle East relations. As I was watching Justin Bieber, there were thousands of people fighting for survival, not just those in Paris, but around the world.

The media is destructive. It strips us of our humanity and tricks us into believing that one disaster is worse than another due to the familiarity we have with one nation over another. The international pain we felt for those in Paris was inconsolable considering how many people around the world don’t have the decency to educate themselves on what is happening on the Earth we live on.

To show how harmful the media is in providing us with equal coverage for all atrocities, Suman Deb Roy analyzed media coverage for the first 30 hours between the Paris and Beirut attacks and compared both.

The number of new domains covering the Paris attacks was at a high of 450 sites, whereas the highest for Beirut was approximately 30 sites. The lowest for Paris was significantly higher than Beirut’s peaking point. This is just a glimpse into the frenzy and chaos revolving around the attacks.

Joey Ayoub, who runs HummusForThought, wrote a blog post about how he comes from a privileged Francophone neighborhood in Lebanon, meaning French is widely spoken and France is considered a second home to him. In his post he writes about how his peoples deaths in Beirut don’t matter as much as those in Paris.

“‘We’ don’t get a safe button on Facebook. ‘We’ don’t get late night statements from the most powerful men and women alive and millions of online users. ‘We’ don’t change policies which will affect the lives of countless innocent refugees. This could not be clearer.”

Ayoub goes on to say, “I say this with no resentment whatsoever, just sadness.”

The mourning of what happened on the night of Nov. 13 in Paris was necessary. But the silence in response to the lost lives of those who live in non-white, non-Western worlds who fight for survival and safety on a daily basis, spoke louder than any Facebook filter ever could.

Standing in solidarity and praying for humanity means also supporting and praying for the thousands of Syrian refugees struggling to find safety. It means praying for those in Syria and Beirut whose homes have become war zones. It means being educated about ISIS and knowing that terrorism has no religion.

It means being aware of the protests, civil war, and corruption plaguing Venezuela, where the authoritarian government in power uses media, laws, and even the country’s own judicial system to maintain control. It means being conscious of the poverty and lack of human rights in Africa. It means trying to fight institutionalized racism, police brutality and mass shootings happening in the United States.

It means paying attention to what is happening globally and trying to educate ourselves on news that doesn’t always make headlines. It means putting aside our privilege and caring about events that don’t immediately or closely effect us and treating all of the events that are devastating to humanity, equally.

Minoo Moallem, a professor of Gender and Women’s Studies at University of California, Berkeley, wrote an article about the value of human lives and how our continual silence is detrimental. “It is important to remember that every single life is precious, including those lived in the Third World where death from poverty, war, and oppression is represented as an everyday banality. Geopolitical location is a matter of privilege, a fact that brings us to the limits of humanism. It is crucial to keep in mind that every loss of life demands that the living entertain a certain failure, even our silent complicity with the conditions in which death becomes desirable.”

As humans, we should not value one life over another, but we do. It’s a fact. As much as we don’t want to admit it and claim that all lives do in fact matter, we suppress the importance of those living in the Middle East by keeping quiet.

As Joey Ayoub said, “My only hope is that we can be strong enough to generate the opposite response to what these criminals intended. I want to be optimistic enough to say that we’re getting there, wherever ‘there’ might be.”

The lives taken by poverty, police brutality, terrorism and the endless list of monstrosities present in our world, are all significant. They all mean something and I hope we, as humans living on planet Earth, are willing to open our arms and do what we can to extend our solidarity to everyone who has suffered a loss from these horrors.