The unspoken rules of urinal etiquette are fucked 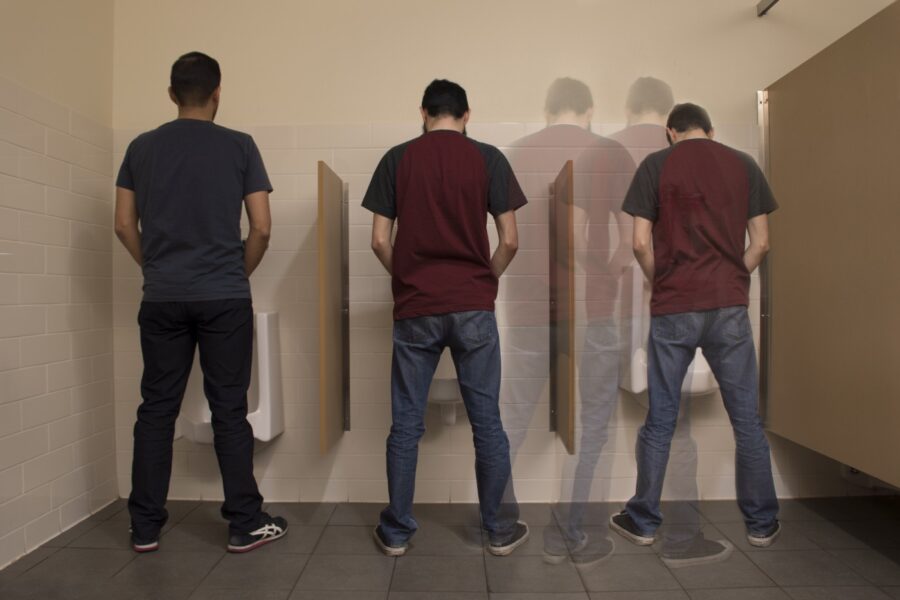 It’s a cold and gray day in Southern California; the rain has been coming down in violent waves as the power shuts on and off. And because of the way the body works, I need to pee. When my class is let out for break, I venture out into the hall and across the building to the only men’s room on the floor. As I open the door, I see a line of men waiting to use the facilities. By now, I can hardly hold it and I decide to skip ahead and hope that maybe there is something open that these men won’t use. And what to my surprise do I see? A whole line of EMPTY urinals waiting to be peed in. Not one, or two, or three, or even four, but five empty spaces are waiting for a good leak.

I look at the line of men and head to the one in the furthest corner — because that’s the rule — and relieve myself. I couldn’t help thinking about how idiotic these guys were to be standing in line waiting to use the stalls when they could use a urinal. Perhaps some of them need to sit down for their business but among the at least 15 guys, I’m sure five must need to pee. Then it hits me: the unspoken, always followed, pee rule most men adhere to.

For those of you who don’t know what that means, it’s a simple one to understand: Don’t pee next to another guy, and only look forward, up or at your pecker.

Luke Parker, a 23-year-old graduate of Ohio State University, said he learned about the pee rule from his father around puberty. “He wasn’t mean about or anything, he kinda told me that it was proper to give people their space during a private moment.

“You don’t stand next to another person at the urinal. Always keep one urinal between you and someone else.”

As ridiculous as it seems — especially when nature calls — it is something that is seen all over the place in almost every multi-person men’s room. For the most part — this is an assumption so I could be totally wrong — these men are straight, and the idea of looking at another penis is dreadful. Even worse is the idea that another guy is looking at your penis. But in reality, that generally isn’t the case. Seriously, and this is coming from a gay man who likes penis very much, no one is trying to watch you pee.

In this particular situation, these guys were most likely college students in between, before or after class. I get it, sorta. Some guys are pee-shy and that is okay. Performance anxiety affects a lot of guys in and out of the restroom, but that is no reason to spend fifteen minutes in line for something that will take less than one minute to complete.

This aversion to male genitalia is something that isn’t restricted to the restroom either. We as a culture have had a longstanding need to “protect” or “hide” the symbolic host of masculinity. This can be seen in media where full-frontal, female nudity is perfectly accepted, but show a peep and the film becomes NC-17.

The fear of seeing another dick freaks a lot of men out. I have heard many men say things like, “I would wait as long as it takes” just to avoid peeing next to another man. Come-the-fuck-on-bro, the dude is probably just trying to empty his bladder the same way you are. There’s no conversation or eye-meeting — unless you’re trying to get something out of it — so why should it be awkward?

Well, it seems a lot of it has to do with comfort. As BroCode and The Good Men Project explain, sharing the restroom with another dude is already, in itself, weird. However it is a necessary evil that all men at some point must endure. As Craig Heimbuch writes for GMP, “if no man in his right mind enjoys a trip to the loo, the least we can do is to try and make the experience as painless as possible for one another.”

And what is more painless than not having the unfortunate experience of seeing another dude’s pecker? Not having your pecker seen while you take a leak.

If that is truly the case, then why do (straight) men like talking about their cocks so much? I have no clue, but it seems counterproductive if you don’t want people to see it.

Parker is no exception to not wanting to be seen while peeing. He said that he gets excited when there are partitions or dividers between the urinals because he has difficulty peeing around other people.

“As someone who has a tendency to be ‘pee-shy,’ I get excited when urinals have those dividers, but overall I guess it’s a little silly. I mean, if there is an entire row of urinals with one man using them I think it would be odd to immediately stand next to him but I won’t hold my bladder if there are a bunch of men each of which are using every other one. You damn well bet I’m gonna go in between two of them and do what I need to do.”

As I walk out of the restroom another dude follows suit. He says to no one in particular, “I’ll just find another one.” I kind of chuckle and say “You know all the urinals are open right? Just use one of those.” I can see he’s thinking about it, but then: “Naw, there’s too many dudes in there. It will be awkward.”

So let’s get real here. Every man — and I say this with utmost certainty — has caught a glimpse of another dude when he’s peeing. It’s inevitable. Whether on purpose or not, it happens at some point. It is courtesy not to look, but sometimes it just happens. However, there are times when guys take a quick glance to size the next dude up. I will admit I’ve done it before. It’s not because I was seeing some kind of sexual gratification, it happened out of pure, well, instinct I guess. Comparing sizes is something men do all the time. You hear it in locker rooms, at the gym, in bars. It is sometimes done in jest, and other times to insult, but either way you frame it, there is a certain amount of sizing-up that men do.

Then again, there is the cruise rule: If you make eye-contact while peeing with a dude near you, more than likely something is about to go down and probably one of you two will too.