For women of violence and assault, coming forward can be almost as traumatic as the assault itself. 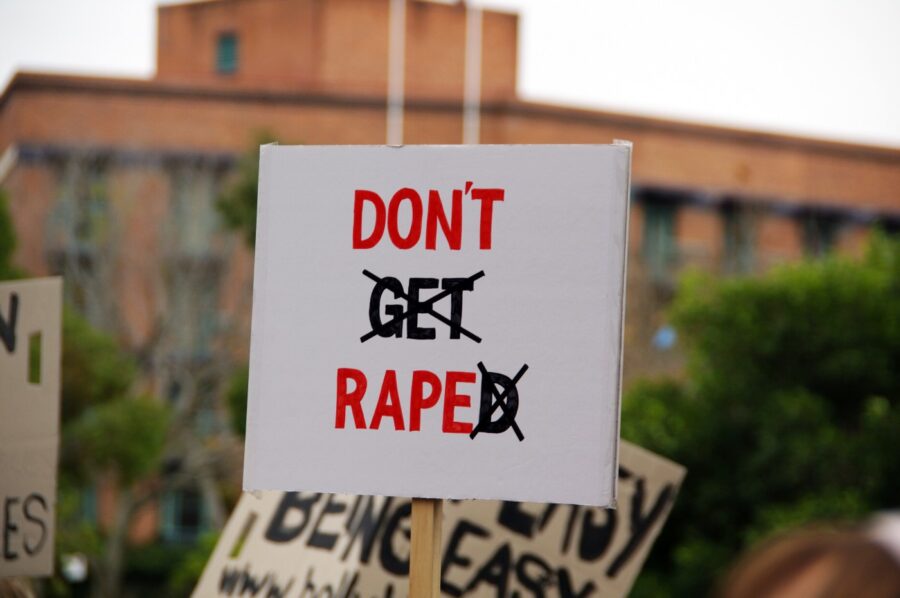 Rape me. Again.
For women of violence and assault, coming forward can be almost as traumatic as the assault itself.

One in four women will be sexually assaulted by the time she graduates from college. I should know — I am the one in four. Sexual violence against women has been on the rise in recent years, and perhaps even more appalling is the way the women who are victimized are treated by society and by the court of law.

It happened to me when I was 15. I was on my high school campus — a place that was supposed to be safe. I hadn’t even kissed a boy yet. It took me two days to come forward to report it to the police and my school’s administration, and about two more days after that to wish I hadn’t said anything at all.

My assailant was 18, and a fellow student. As most things do in high school, it somehow got out and became known that I had reported him for sexually assaulting me. In the following days, three more girls came forward and reported that he had done similar things to them. That didn’t seem to be of concern to the student body, or the parents of the students for that matter.

I was called a slut, a whore, and worst of all, a liar. I was told I wanted it.

A parent even tried to get one of the other girls who came forward kicked out of school by getting other parents to sign a petition.

During the aftermath, I remember sitting on my bed, sobbing into my mother’s arms and telling her, “I know why rape victims don’t come forward.”

I wanted it all to go away. Everything. I wanted my reputation back, I wanted people to stop slandering me and my three friends. I had been pinned up against a wall, with my hands restrained behind my back with his knees, and his hand over my mouth so no one could hear my screams.

I felt as if my attacker’s hand was stifling me once more after I reported it. I was being silenced by society’s vicious reaction to what was a very traumatic experience.

The one bright spot in the shit storm that was the end of my sophmore year in high school was that the administration and campus police saw to it that our assailant was suspended until graduation, where he was not allowed to walk with his class. The police encouraged us to press charges. But one by one, we each backed out. Perhaps we were afraid to face him, perhaps we wanted to forget, or perhaps we were just hoping others would and that we would eventually have our good names back.

Unfortunately, many women are do not recieve the support from officials that my friends and I did. These women are not only slandered by society, but are often failed by the court system as well. Just take a look at pop music artist, Kesha.

Kesha was ordered on Feb. 19 by a New York City judge to keep her recording contract with music producer, Dr. Luke, whom she claims drugged and raped her in 2006.

The 28-year-old star claims Sony record producer Luke Gottwald, a.k.a. Dr. Luke, drugged her with pills and sexually violated her on her 18th birthday.

By ordering Kesha to continue working with a man she claims violated her, the judge is essentially saying Kesha is worth no more than the dollar sign she once used in her moniker. That her value as a person is tied to the money she has made Sony with Gottwald, and that her sense of safety and self worth as a person essentially mean nothing.

Sadly, Kesha is only the latest in a string of women who have filed charges against a high profile celebrity for violating them, and not only recieved no support from the court of law, but also received backlash from society as well.

Much of the Twitterverse has rallied to support Kesha, creating #FreeKesha and #SonySupportsRape in an effort to show distain for the judge’s decision.

Perhaps the most moving display of support was the Lady Gaga’s Oscar performance on Feb. 28. Gaga performed a heart wrenching version of her song “Til It Happens To You,” accompanied solely by a piano. Then, towards the end of the performance, Gaga was joined on stage by survivors of sexual assault who stood by her with messages such as “Not Your Fault,” and “Survivor” written in black ink on their arms.

However, there are still those who have gone out of their way to tear the singer down. She has been called a slut, a gold digger, and a “lying fucking home wrecking whore.”

Kesha, however, has remained optimistic in the face of cyberbullying she has recieved after coming forward. She issued a statement via Facebook thanking fans for their support.

“But at this point, the issue is bigger than just me,” the statement reads.

Kesha’s words could not be closer to the truth.

Retired actor and comedian Bill Cosby has recently been accused of drugging and/or sexually assaulting more than 50 women. The first incident took place in 1969, and Cosby allegedly continued to violate dozens of women until as recently as 2004. Most of Cosby’s accusers will never get their day in court, because the time period they had to press charges has long since expired.

All 50 states have varying statutes of limitations regarding sexual assault. In California, victims of sexual assault who are minors, have until their 28th birthday to press charges regardless of when the assault took place. If the victim is not a minor, a report and a DNA sample must be filed within one year of the alleged assault. The statute of limitations on rape in California is 10 years, regardless of whether or not the victim was a minor.

By putting a statute of limitations on pressing charges in sexual assault cases, the United States government is essentially telling those who have been violated that they have a certain amount of years to decide whether or not to file, and if they choose not to within that time period, it’s as if it never happened. That they should be “over it” by then, and their assailant should face no punishment.

There are many reasons that rape victims may choose not to come forward or not to press charges for years. For me, and for many others who have experienced sexual violence, it was the backlash I faced from those around me. The name calling. The judging glares. Those, who may mean well, saying, “Well, are you sure you didn’t do anything that may have sent him the wrong signal?” It was enough to make me drop the charges and hide in my room for days.

The U.S. justice system has failed sexual assault victims over and over again. So much so, that only 2 percent of rapists will ever face jail time. In all fairness, this could be, in part, because an estimated 68 percent of sexual assaults that occurred over the last five years were not reported. Still, out of those that are reported and go to trial, only the same 2 percent will ever recieve felony convictions and serve even one day in prison. The other 98 percent will walk free. Perhaps more rapes would be reported, and therefore more rapists would see jail time, if victims felt that the justice system was actually there to make sure justice is served.

In 2013, then 14-year-old Daisy Coleman, of Maryville Missouri, accused then 17-year-old Matthew Barnett of raping her in 2012 and then leaving her drunk and incoherent on her family’s front lawn in freezing temperatures. Barnett, now 21, plead guilty to a misdemeanor count of endangering the welfare of a child in 2014, and served 2 years of probation. The media, however, has referred to Coleman as a liar, as promiscuous, and as everything except what she definitely was — a fourteen year old child who was supplied with alcohol and allegedly assaulted by someone who should’ve known better. According to The Independent, the assault was recorded on a cell phone and then posted to the internet. Coleman subsequently experienced brutal cyberbullying, and verbal abuse from her peers that eventually drove her to attempt suicide by overdose in January of 2014. Barnett’s probationary period ended in January of this year, but Coleman’s name will forever be tarnished, as nothing online ever disappears. Her probationary period will last the rest of her life.

Barnett never served any prison time, despite the fact that he even admitted to endangering Coleman’s welfare.

According to the Southern California Public Radio, it is difficult to tell when, exactly, a child learns to differentiate right from wrong. The prefrontal cortex of the brain, which is responsible for reasoning, isn’t fully developed until age 23. It is possible, then, to argue that Barnett, and other sex offenders who were technically minors during the time they committed their crime(s), did not know what they were doing was wrong.

If that’s true, however, then why don’t we see more cases of minors raping other minors? Why aren’t there more cases of minors being arrested for distributing child pornography? According to the The Sexual Assault Response Services of Southern Maine, only 17 percent of all arrested sex offenders are minors. Although, it is unclear how many child pornography distributors are minors, the number has jumped with the rise of the internet and the ease of sharing selfies, it is probably safe to say that most minors do not engage in such practices.

According to a team of researchers at Yale’s Infant Cognition center, known as Baby Lab, a growing number of researchers now believe that we are born with some sort of innate sense of right and wrong. Although parents, peers and the society we grow up in help to cultivate this sense, they do not create it. If babies can tell the basics of right from wrong, surely Barnett knew that raping a 14— year — old girl was wrong.

We, as a culture, need to demand more from our justice system. We need to seek harsher punishments for sex offenders, no matter whether they are adults or minors at the time of their crime. All sex offenders should be see prison time, and not be allowed to plead their egregious crime down to a misdemeanor, and all should be forced to join the national sex offender registry.

Perhaps then, more victims of sexual assault will not be afraid to come forward, and more sex offenders will be punished for their crimes making the world a safer place for women to live in.