Hungry Students Across the Nation Must Choose Between College and Food 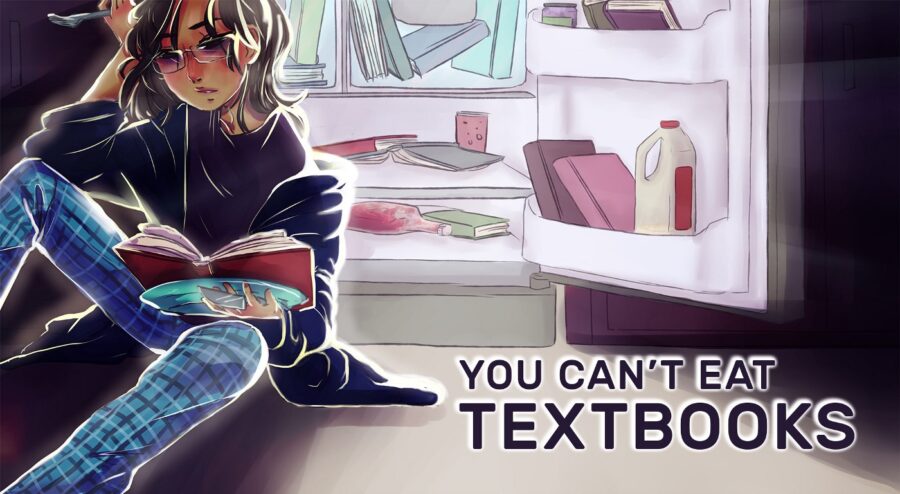 It always seemed to happen at the least opportune moments. This time, her stomach growled loudly during the middle of her Sociology lecture, while everyone was silently listening to the professor at the front of the classroom.

She looked around, hoping her peers couldn’t hear her stomach’s desperate wail for food. Nobody seemed to notice. She rummaged around in the bottom of her book bag, shuffling things around in search for food she knew wouldn’t be there. She hadn’t left anything in her bag. She never had anything to leave.

Still she hoped for something, anything; any small morsel of food to have been miraculously forgotten within the bag somehow for her to find now in her moment of need. After more shuffling, she extracted her hand with only a solitary Tic Tac to show for her efforts, which she greedily gobbled up, before attempting to listen attentively once more.

She crossed, uncrossed, then re-crossed her legs and slouched over the desk, as if the pressure on her abdomen from the adjustment in posture could fill the vast emptiness in her stomach. It didn’t. The hunger was still there.

To make it worse, the Tic Tac had caused her to salivate and convinced her brain that she was in fact about to feed it. Unfortunately, even if her brain had been fooled, she knew the truth. She wasn’t going to eat for a while. Her only solace was that the position had in fact quieted her stomach, leaving her fellow students and professor uninterrupted by the rude noises of her crying belly. Meanwhile, she tried to find the positives in knowing that while everyone around her remained blissfully oblivious to the noises, she still hadn’t eaten in nearly four days.

Near the end of her freshman year at Cal State Long Beach, Allison Harvey found herself homeless, jobless, and unsure of where her next meal would be coming from. She was just 18 years old.

Imagine having to choose between paying for a textbook in order to pass a class vital to your major or buying groceries for the month. You weigh the two, as if they are equals, seriously determining whether your physical well-being is worth the overpriced, and inedible, pieces of paper that stand between you and your future.

This situation is the stark reality for many students, like Harvey, across the nation who are having to choose between their education and filling their stomachs. According to Feeding America, as many as 1 in 10 students will find themselves in this situation during their college careers.

For Harvey, her mother had just lost her job and her month-to-month lease on her apartment was up.

“My mom was always able to support me on her own. She didn’t want me to work. She just wanted me to focus on school,” Harvey said. “But the world came crashing down within a month so to speak. My mom lost her job, and even with FAFSA and my scholarships and grants, I couldn’t afford my rent. It covered the cost of school, but nothing else.”

Not wanting to stress her mother out more than she already was, Harvey said she told her mother she was able to find a job at a local coffee shop, which allowed her to keep her apartment and gave her a little extra spending money. This was a lie. According to Harvey, the truth was much more bleak.

“I slept in my car — crashed on friend’s couches. I ate at local soup kitchens. All while trying to keep my grades up and keep up appearances for my mom,” Harvey said.

Harvey said that after about a month of being unsure where she would sleep or where her next meal would be coming from, she found a job as a waitress at a restaurant near campus.

“The job was a godsend. Seriously. I’ve never been so excited to go to work as I was my very first day at that restaurant. That job has allowed me to find a little apartment with two roommates with enough money left over to eat. I never thought I would be in a situation where I would be so thankful just to know where my next meal is coming from.”

Food insecurity, or the lack of nutritious food, is an epidemic that has grown exponentially in recent years and has forced college administrators to find ways to help feed their students. Many schools across the nation have opened food pantries, where qualifying students can get food for free. These pantries started popping up on campuses in 2007, after the economy crashed, and the numbers have since jumped to over 200 campuses across the nation having some sort of food pantry to help students in need.

Tyler Enrique, 21, a student at Michigan State University, frequents the food pantry at his school.

“If it wasn’t for this pantry I’d have no idea how I was going to eat,” Enrique said. “I’d probably have to drop out in order to work full time. I never thought I’d have to choose between an education and my stomach and thanks to the pantry at school I don’t have to.”

Enrique says with the rising cost of tuition, rent and food, even with his parents’ help, his part time job, loans and federal aid, he wasn’t able to afford everything.

“Somehow, food came last. Tuition, rent and everything else came first and at the end I had $10 to my name sometimes, and that had to feed me for a month. It was impossible. Then, someone told me about the pantry.”

Though food pantries help students on campuses that have them, the vast majority of college campuses do not have such a resource for their students.

Marisol Loza, a student at the University of California Berkley, said she wishes her campus had a food pantry.

“I live in an apartment with my two year old son, I go to school full time and work full time,” Loza said. “Even with my full time job, we’re just barely scraping by. I always make sure my son eats, but sometimes, I go without because there just isn’t enough money to feed both of us. A food pantry at school would be so amazing.”

According to the College and University Food Bank Alliance, there are many important factors to consider when starting a campus based food pantry, such as the campus’ need, the space for the pantry and how often the pantry will distribute food.

Katelyn O’Doole, a student at Saddleback Community College in Missouri, helped start the food bank on her campus.

“I just saw a need that needed to be filled and decided to try my best to do it,” O’Doole said. “It started with organizing a food drive. And we got such a positive response from the community that we decided to ask the college if it could be an ongoing thing. Everyone who runs the pantry are volunteers, professors, students and faculty members. Its a very small space, and it varies from week to week how much food we have and how many students we can help but at least it’s something.”

O’Doole said the pantry is supplied by a weekly food drive and sometimes the drive gathers enough food to help 50 students, and sometimes only enough to help two or three.

“It’s discouraging when I have to turn people away,” O’Doole said “But I have to focus on the positive. Even if we can only help one student that week, it’s worth it.”

Kesha Mann, another student at Saddleback Community College, is a student who regularly receives help from the food bank started by O’Doole.

“Katelyn will never know how many people she’s helped by seeing her idea through,” Mann said. “I’m a low-income student, so I qualify for help from the pantry, and yes, there have been weeks where I’ve been turned away because there wasn’t enough food, and I see how it breaks her heart. But there have been many more weeks where my daughter and I can both eat because of her. I wish more students on other college campuses would pay attention to the need at their school and be as dedicated to filling it as Katelyn is.”

O’Doole is just one of many students who have seen hunger on their campus and decided to try to help. In fact, most campuses that have food pantries were started by the plight of one student. Although it takes a team of volunteers to keep the food pantry running, O’Doole said students who want to help start a food bank may be surprised by the support they receive simply by asking.

“All you have to do is ask. All they can do is say no. Then you move on to the next person.”

There are currently over 200 college and university campuses in the country with food banks. According to the US News and World Report, there are over 1400 four-year universities in the United States. This number does not include two-year institutions nor technical schools. With 1 in 10 college students suffering from hunger, there is a need for some sort of respite on every campus. This need can be filled by one student on every campus, like O’Doole, seeing a need and caring enough to fill it. Just one student can make a difference between another student eating that week or going hungry.

“That’s what keeps me going,” O’Doole said, “The fact that it helps people. I tell students on other campuses that they should just try to start one. They’d be surprised by the amount of support they’d receive.”