Modern-Day Slavery in the USA

The reality behind cheap, abundant produce 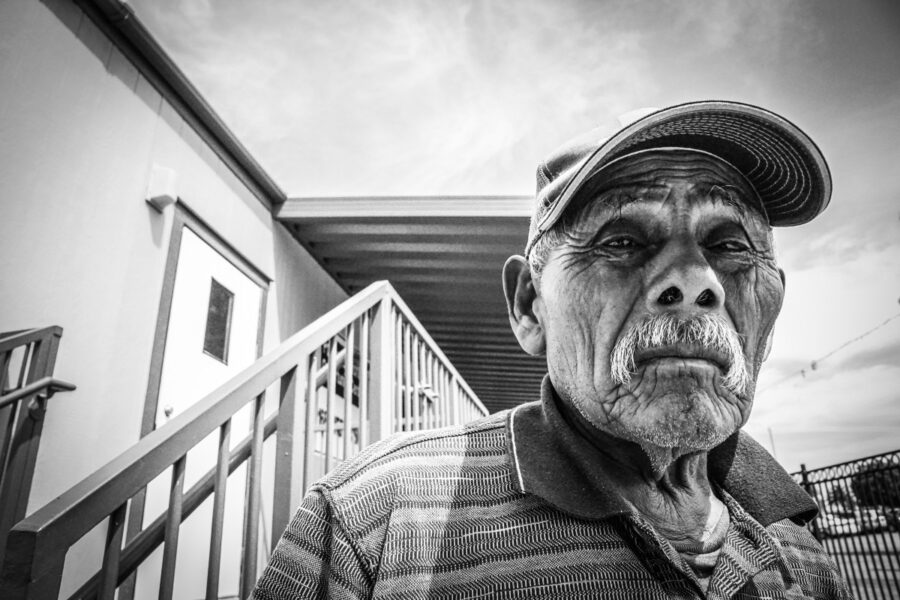 Standing in front of a house in Pomona, Calif., Pancho Lopez, 90, originally from Pueblo Guerrero, Mexico is an undocumented and homeless worker who spends his days looking to get hired and his nights sleeping beneath a bridge. “Finding labor has been tough because of my age. No one wants to hire me anymore,” he said.

Most Americans take the abundance of produce and the consumer-friendly prices we pay for granted. Unfortunately, the reason that we are able to have so much for so little is directly linked to the plight of undocumented Latino immigrants.

There are 11.3 million undocumented immigrants in the United States according to a survey done by the Pew Research Center in 2014. Of those, 5.9 million are Mexican immigrants, which comes out to about 52 percent. Of those 5.9 million, 4 percent are working in the fields of agricultural states, one of the main ones being California, for less than minimum wage in near slave-like conditions.

Most Mexican immigrants in the U.S. are here one of two ways: either through guest worker programs (H-2A Visa), or they are risking their lives to immigrate into the country undocumented. Despite their legal, or illegal, status in this country, the main objective for all of them is to make a better living for their families who either live in the U.S. or back in Mexico.

Immigration is an issue that has recently come under major scrutiny by the Republican party. However, it is important to review our own history to examine how and why exactly we have had such an influx of immigrant workers.

The influx of immigrants, Mexican immigrants in particular, over the last 20 years is largely in part because of the signing of North American Free Trade Agreement, NAFTA.

NAFTA, a treaty made between the United States, Canada, and Mexico, went into effect on Jan. 1, 1994. It was implemented to eliminate tariffs for qualifying products, which could make the prices of exported and imported products significantly higher.

This in turn is the reason so many products in the U.S. are so much cheaper than in other countries. However, this comes at a cost. Since NAFTA went into effect, 1.43 million farm jobs in Mexico have been lost.

The loss of so many jobs in Mexico occurred because the removal of tariffs by NAFTA, along with the passing of the Farm Bill in 2002, led to an exponentially higher production of corn and grains in the U.S. Since the tariffs were gone, it was now in the U.S.’s best interest to produce higher quantities of corn and other grains to sell to other countries. As an encouragement to farmers, the U.S. even subsidized farms by 40 percent.

As a result, the price of corn and other grains became so cheap to purchase from the U.S., Mexican farmers could not compete and were forced out of business.

With so many jobs lost in the agricultural industry in Mexico, it came as no surprise that the rates of Mexican immigrants into the U.S. also started to rise. The number of undocumented Mexican immigrants from 1995 to 2005 increased by almost 4 million.

Unfortunately, the large increase of Mexican immigrants has caused many Americans to believe in the misconception that immigrants are the reason why so many citizens are currently unemployed.

However, according to the documentary series Inside man, directed by Morgan Spurlock, there are currently 7,000 jobs available harvesting oranges open to all American citizens in the state of Florida alone.

The plethora of job openings in the agricultural industry is a result of the difficult back-breaking labor that working in the fields demands. The average farm worker works roughly a 42-hour week on an average $7.25 an hour salary, according to National Farm Worker Ministry. This does not take into account that the pay varies greatly on how long a worker has been with a specific employer, or that Mexican migrant workers (who are almost always undocumented) are given lower wages, no health benefits, and worsened working conditions.

What the National Farm Work Ministry and most citizens also fail to take into consideration is that because most migrant workers are undocumented, they are not paid the minimum wage that a U.S. citizen would be paid.

Mt. SAC History Professor Raúl Chávez, explained how difficult farm life and farm work can be and how for most of Americans, farm work would never be chosen as a career. Even for Americans who have experienced picking their own fruit from local farms, many could not handle the grueling task every day.

“We could go to Camarillo for a weekend to pick strawberries and take it home, but we could never do that day after day. That’s the difference,” said Chávez.

Most of these undocumented migrant workers harvest produce in the fields from 12 to 14 hours a day, six days a week, and often times are up by 4 a.m. on the way to the fields while most Americans are still asleep.

Most migrant workers work around 60 to 84 hours a week which for most American workers means overtime with time-and-a-half pay. Yet because they are undocumented people, they are taken advantage of and not paid overtime.

In some cases migrant workers are forced to work every day of the week when it comes to certain fruits and vegetables that are in high demand during certain times of the year.

Workers are only allowed an hour break for lunch because any more time spent taking breaks means less money to support their family in the U.S. or to send back home. Not to mention that the money that these harvesters slave away to earn is then taxed by the federal government. That’s right, taxed.

In states like California, which is where most of American’s produce comes from, the tax rate is one the highest in the country.

After all federal and state taxes are taken out, a California migrant worker will see on average 21 percent of his or her check disappear without reaping the benefits of social security, medicare, medicaid, disability, or unemployment benefits from which all other American workers benefit.

Chávez added that aside from the awful wages, most of these migrant workers lack job security, as maintaining a position in the agricultural industry is nearly non-existent; a fact that many onlookers seem to ignore.

“Migrant workers are part of a production system that has seasonal terminations,” said Chávez. Chávez added that another way that the agricultural migrant worker’s life is compromised is because the harsh working conditions destabilizes their family life: a cultural necessity that many Latinos find imperative to their way of living.

In addition to all of the struggles that these workers face in the field, the burden of being caught by Immigration and Customs Enforcement and being sent back to their country of origin is a very real and constantly unsettling factor.

What is happening with undocumented agricultural workers in the United States is nothing short of 21st century slave labor.

In addition to the terrible working conditions, horrendous pay, and imminent threat of deportation, undocumented immigrants are also racially discriminated against and considered less than human.

In this way the treatment of undocumented workers is similar to what African Americans have suffered throughout the course of U.S. history.

It starts with something as simple as calling undocumented immigrants illegal aliens. The title alone alludes to the fact that these people, immigrants in this country that are undocumented, are somehow so different from American citizens that they are described as if from a distant planet.

It is evident that racism towards African Americans still exists to this day, but now there are huge movements and organizations that try to stop the spread of racial inequality in this country.

However, with Latinos and more specifically Mexicans, the stigma is still present, and there are no current movements attempting to rectify that. It is as if this issue continues to go unnoticed.

Chávez explained that the concept of immigration has its roots from white-stream American fear of the “other.” He added that our Founding Fathers failed to realize that incoming immigrants were not all going to be white Protestant Christian and it caused a problem.

“The United States’ earliest immigration reform focused on keeping dark-skinned non-Christian people out of the country, whether it be the Jews, Catholics, Buddhist, or Chinese,” said Chávez.

“The context of immigration in itself is racist. There is no difference between legal and illegal immigration, the purpose has always been to keep people out.”

What does the undocumented immigrants the greatest disservice is that potential leaders of the Republican Party are perpetuating the behavior of seeing these hard working people, who provide so much for this country, as criminals, rapists, and everything other than human beings.

Chávez noted that racist behavior all stems from the initial reactions of privileged white males’ power being diminished and under attack. “We’re not going to admit it, but it has always been about race,” said Chávez.

“It is White America fearing where we are going as a nation. It is estimated by the year 2040 that [the] white population will become the minority.” Chávez added that Americans have always had a sense of cultural arrogance over any immigrating peoples.

“We as Americans define diversity as a group of people of different backgrounds who have all become Americanized,” said Chávez.

When it comes to Mexican immigrants in particular, the assimilation process for Mexicans has not changed the way Americans may have wanted it to, due primarily to the proximity of the two countries and the unwillingness of the Mexican people to let go of their culture.

“[Americans] are good with multiculturalism when it comes to a weekend celebration. Whether it be fiesta, a Chinese New Year, or Japanese boat races that allow us Americans to play cultural Ambassador for a day. But when I go home I want it to be American.”

What the average American needs to realize is that most of these people who immigrate from Mexico or from another country into the U.S. are here to provide for their families and give their children a better life.

The reason these people want citizenship is not to reap the benefits of this country and take advantage of the system, but rather to have the right to be treated as a human being and not just another number that is deported every couple months.

The first step towards fixing any problem is admitting there is one.