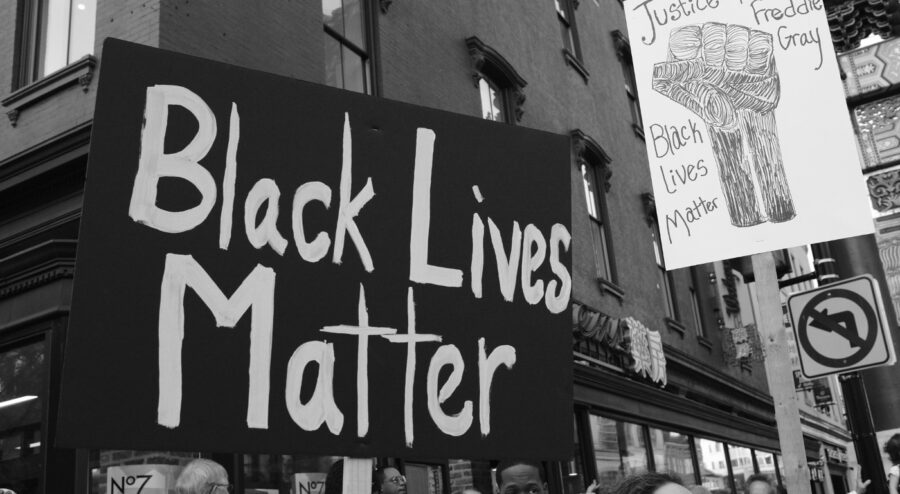 As tension persists and the morality of the country is being consistently challenged, openly discussing race and the role it plays in America continues to be of utmost importance. Whether it is police brutality or economic disparity, black lives continue to be ignored.

When future generations look back at American history, there will be a line of demarcation beginning on February 26, 2012 — the beginning of the civil rights movement for a new era. It was on that night that a 17-year-old black teenager, wearing a hoodie and walking home, was racially profiled by a neighborhood watch captain and shot to death.

Trayvon Martin’s death unleashed a wave of anger, frustration, fear and tension. Opinions on whether the shooter was acting in self-defense or committing murder were split across racial, political, economic, and generational lines. Not only did the death of Martin create a sudden social awareness of inequality, but also challenged the idea that the United States had become a post-racial society.

The movement began, as most things from our generation, as a hashtag on Twitter: #BlackLivesMatter. It began trending after Zimmerman was acquitted of murder by the Florida justice system for fatally shooting Martin. But from this hashtag grew a national civil rights movement, founded by three activists: Alicia Garza, Patrisse Cullors, and Opal Tometi.

With each public slaughtering, the list of names grew longer and the chants emerged louder.

Each one illustrated the reality of racial profiling and highlighted the modern-day equivalent of lynching. The rope was replaced by police profiling, the tree branches by a “war on drugs” and the prison-industrial complex. The echoes of angst and disillusionment still permeate loudly in the black experience.

There are still those who do not understand the concept or relevance of BLM. These people dismiss the social activism by those attempting to address the beast itself: institutional racism. Portraying the response as overly-sensitive or not peaceful enough betrays reality and ignores that the well-being of black Americans has always relied on civil disobedience. This is the only time people pay attention, which forces the country to reflect. Excuses made by society that unwittingly halt racial progress no longer stand as America looks into the ghettos, prisons, and communities often ignored because of the color of their skin.

Economic oppression is a major issue for BLM and a struggle black Americans continue to face.

The average white household had $111,146 in wealth holdings in 2011, compared to $7,113 for the average black household — the average American household in 2015 consisted of 2.54 people. Even when accounting for variance in levels of education, white high school dropouts have a higher median net worth than black college graduates.

There are two distinct explanations one can conclude from this information. Either you can believe black people are inferior — incapable of keeping up economically in a capitalistic society — or that concerted efforts manufactured the disparity. Institutionalized racism, from inception to its contemporary form, drastically tilts the economic opportunity and prosperity in favor of a perceived dominant culture.

Just as racism evolved through the years, so has segregation — albeit in a more subversive incarnation. Segregation is thus used to help achieve disparity and is the most visible evidence of the problem of institutionalized racism.

Ghetto: (noun) a part of a city, especially a slum area, occupied by a minority group or groups; (verb) to put in or to restrict to an isolated or segregated area or group.

Housing discrimination and red-lining (denying or providing lower quality mortgages/loans to certain groups of people regardless of financial qualifications), the engineers of ghettos and suburbs, continue to successfully segregate schools and neighborhoods. Once separate, disparities in the allocation of funding occur. The communities designed for black Americans have far fewer resources, resulting in much worse schools that those populated by white students. More than 40 percent of low-income schools don’t get a fair share of state and local funds, the Department of Education Research found in 2011.

The result is substandard materials and quality of teachers, where black students are less prepared for college or life after school. They are also more likely to get in trouble (beginning in preschool, black students are suspended and expelled at a rate three times greater than white students). This foreshadows the treatment they will sustain in other facets of society for the rest of their lives. This attitude, toward black men in particular, manifests itself in the issue of mass incarceration. “Poverty is the parent of revolution and crime.” — Aristotle

These segregated communities are beset by poverty which creates a chain reaction. Inadequate education is followed by limited employment opportunities, culminating in increased incarceration rates and deprivation of voting rights. It is a vicious cycle that disenfranchises generations of black people. This cycle is then inherited by the next generation.

Children are born into economic ruin and households where one or both parents — statistically more likely to be the father — may be without a job or in prison. In 2010, black men were six times as likely as white men to be incarcerated in federal, state and local jails. The correlation is quite clear; the best indicators of crime are poverty levels. By creating higher rates of poverty in black America, you are ensuring that they will be imprisoned at higher rates.

A predisposition to anxiety and depression is associated with the strain of impoverished environments. According to Proceedings of the National Academy of Sciences of the United States of America, “The stress of growing up in a poor and unstable household affects children as young as 9 years old on a genetic level, shortening a portion of their chromosomes that scientists say is a key indicator of aging and illness.”

Systematic oppression is directly responsible for the mental and physical health of its intended victims; a methodical dismantling of the black form.

The new studies provide evidence that these imposed environments damage children, spanning through generations, at the most fundamental biological level. With a lack of financial means to address medical issues and a general distrust of institutions due to discrimination (see Tuskegee syphilis experiment for example), many people of color go untreated. This has led to serious and lingering consequences for the well-being of entire communities.

Ignoring racial inequities does not solve racism. The color-blind mantra is a massive philosophical failure, and the United States is worse off because of it. Sweeping such a volatile and divisive issue under the rug for decades has only contributed to a growing resentment and has done little to actually unite us as a nation.

Mt. SAC student Zanesha Williams, 19, believes that this is exactly why #BlackLivesMatter is needed. “I feel like people who think this is the problem, essentially they don’t see [civil rights] as a big issue.

“When you say #AllLivesMatter, you’re disregarding what’s going on right now and how black people get treated in our society,” said Williams.

A lack of information is another reason why this problem persists. Ignorance often leads to confusion and questioning of BLM. Currently, protesters question the 2016 presidential candidates about the 1994 crime bill — also known as the War on Drugs. It was written by then Judiciary Committee Chairman Joe Biden and authorized by president Bill Clinton, and has been heavily criticized by activists. The attention given to this issue forced moderators at debates and national media to question candidates about their positions on it. Policies such as this continue to directly affect millions of lives — especially for the most vulnerable and oppressed segments of the population.

The American public relies on the notion that black people don’t have it as bad as they used to, and that they play the “race-card” to avoid feeling guilty about inequality.

Disapproval is a usual reaction to civil rights campaigns — not by the youth, but rather by those in power. Even Dr. Martin Luther King Jr. was heavily criticized in his day — labeled a troublemaker by President Harry S. Truman and continuously harassed by FBI director J. Edgar Hoover (even demanding of King to commit suicide through anonymous letters).

It is only in retrospect that we value the sacrifice of protesting and civil disobedience.

Such was the case with King. He was everything required of a black man; a devout Christian reverend who preached and practiced non-violence which was contrary to Malcolm X or the Black Panthers.

Even so, the Nobel Laureate’s reward for peaceful protest was a bullet to the neck at the age of 39.

The conclusion drawn from the execution of a man who turned the other cheek is that there is no correct manner with which to fight for your freedom. Sometimes bad publicity and radical tactics are going to be part of social movements.

“I don’t always agree with all Black Lives Matter’s tactics or actions. They can be rude and do extreme things, but that’s a minority and doesn’t represent everyone involved,” said Eric Banks, 19, member of the Black Student Union at Mt. SAC.

However, the need for a civil rights movement in 2016 is clear: to bring awareness to the inequality and injustice black America faces today. Revolution is an act of self-preservation in the face of treachery; such is the black existence in this country. There is nothing more emblematic of the American spirit than protesting tyranny. It is precisely why and how the United States was founded. Even with disagreement in how to go about enacting change, the audacity of revolt inspires.

“Like with anything, people can be ignorant and that complicates things for Black Lives Matter. It will make everyone look that way, when it’s not the reality” said Banks.

There is no central figure to provide direction for the BLM movement. No I have a dream or I’ve been to the Mountaintop speech that will forever resonate. This era’s movement will be defined by its ability to gather information and ideas from all over the country, efficiently and quickly, through social media outlets; being aware of incidents and oppressive policies immediately while setting up marches and protests anywhere within days. Accompanied by this enlightenment, though, comes the millennial’s burden to improve upon the injustices of the preceding incumbents and inch closer to fulfilling America’s promise.

“ — that all men are created equal, that they are endowed by their Creator with certain unalienable Rights, that among these are Life, Liberty and the Pursuit of Happiness.”
— The Founding Fathers, July 4, 1776 American seal with the unofficial motto: E Pluribus Unum: “out of many, one”

The U.S. ought to be compelled by its conscience; a yearning for justice in the human condition. Incarcerating downtrodden people at unprecedented levels is not a solution to ending social disharmony caused by centuries of discrimination. The next president’s administration, legislation, and voters must help erode away the cancerous effects of oppression through policy so that future generations may inherit a better society than the one found in 2016. There must be an aspiration to give the better angels of our nature credence rather than to continue being haunted by our most destructive demons. For it is not only American exceptionalism that is at stake, but also a moral legacy as a people.