The Louisville Lip: How Ali Shook Up The World

He was always more than just a great boxer 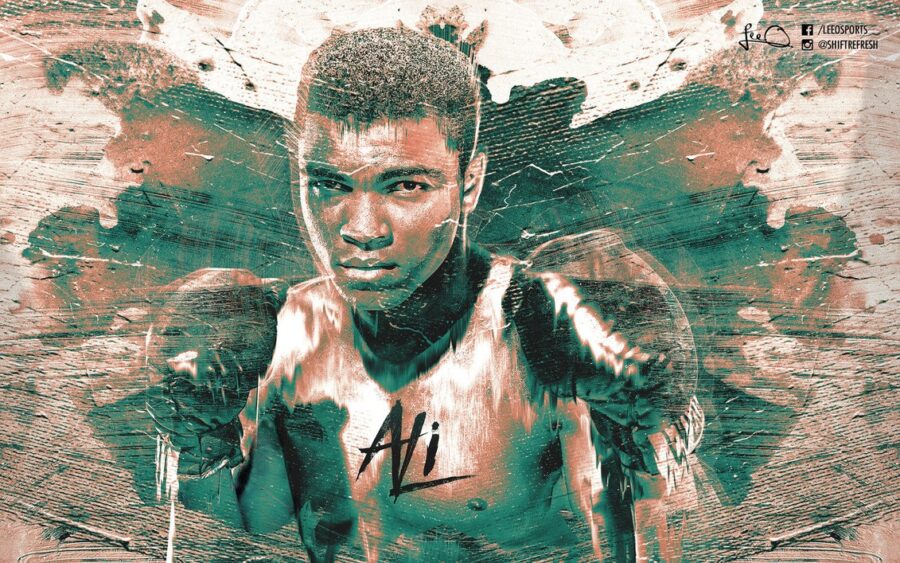 His words carried more weight than his punches, his wit was quicker than his reflexes, his rhymes more enchanting than his shuffle — float like a butterfly, sting like a bee— and his name was Muhammad Ali.

The legend began in Louisville, Kentucky where Ali grew up in the Jim Crow south. Segregation left an indelible mark on him, giving him a motivation to defy the social norms of the time and stand up for himself. With a porous education and lack of interest in school, his brilliance required a different avenue to be noticed by the world.

Medal presentation at the 1960 Olympic Games in Rome

The origins of the bombastic and domineering Ali have a quaint beginning. He had his bike stolen as a 12-year-old and in a fit of anger wanted to fight the thief. He joined a local boxing gym in order to learn how to defend himself and in the process harnessed his natural ability as a boxer. The teenager displayed great athleticism and reflexes, going on to win gold during the 1960 Olympics in Rome the summer after graduating high school.

Upon returning from representing his country in glorious fashion, he felt that he had earned his equality as an American — with that medallion being a huge source of pride for an 18-year-old Ali. He carried that medal everywhere he went and even wore it in his sleep.

Ali’s youthful exuberance led him and a friend to go into a ‘whites-only diner’ and sit at the counter — where he ordered a coffee and burger. The waitress replied to a newly famed American hero, “we don’t serve Negroes” and asked him to leave. Ali furiously stormed out until he reached the Second Street Bridge overlooking the Ohio River in Louisville and hurled his gold medal into the waters in disgust . Ali realized he would not be given respect in America, he had to take it by any means necessary.

I know where I’m going and I know the truth, and I don’t have to be what you want me to be. I’m free to be what I want.

His roots in Louisville would set the tone for decades of defiance. 1960s America expected it’s black men to be submissive to the white power structure, accepting their place in American society no matter the conditions. Ali would come to do the complete opposite however, he would not bow down. It began with his arrogance and boastful talking as a young fighter. In promoting fights to fans and journalists, he became a poet and banter was his art form. He was the original rapper, an athletic Shakespeare. He raised his voice, shook his fists and proclaimed his greatness to all — “I AM THE GREATEST!” Nothing angered the white establishment and threatened the status quo more than a cocky Ali.

He was nothing if not charming and the gravitational pull of his stardom was astronomical. He did not care if you were annoyed by his confidence, that made him want to brag even more. This led boxing fans to root against him in big fights. Ali came to understand that he could use racism to his favor as a fighter. If he riled up white audiences with his self-righteousness, they would pay to come watch him lose. Ali could manipulate his environment with his words, they were so powerful he could get white men to root for the black boxers like Sonny Liston simply because they were against him.

It’s not bragging if you can back it up. His fame attracted many social figures of the radical 60s, foremost Malcolm X and the Nation of Islam. They saw the potential of a young and handsome black superstar. They befriended Ali and helped guide him towards Islam after being raised Baptist in the rural south. He began to regularly attend meetings in 1961 and became enamored with their vision to improve the conditions of African Americans.

After beating huge favorite Liston for the heavy-weight title in 1964, Ali announced to the world that he was now Cassius X. He had kept that a secret leading up to the fight under counsel of Malcolm X, but would reveal it passionately in front of the white masses. His career as a civil-rights activist and conscientious objector was underway. Cassius X would officially become Muhammad Ali shortly thereafter when Elijah Muhammad, leader of the Nation of Islam, bestowed it upon him. I am Muhammad Ali, a free name — it means beloved of God, and I insist people use it when people speak to me.

Cassius Clay became “my slave name” to Ali . It symbolized oppression and white power to him because the surname ‘Clay’ was that of a slave owner from Kentucky — who owned his great-grandmother and later freed her. Those who continued to called him Cassius Clay were shouted down angrily, though the media went on for seven years referring to him by his birth name — including the progressive New York Times. When black boxers would use the name Cassius, Ali shouted “Uncle Tom!” at them and labeled them the enemy.

Ali was at his most radical in this mid 20s under the influence of an extremist organization. All the anger and frustration that had festered under two decades of Jim Crow came bursting out. This period of his life was where Ali was most polarizing and hated. He saw ‘the white man’ as the enemy of freedom and tranquility for black america. He was deemed a threat to America’s way of life and a racist. The consequences of his actions would be imposed by the US government.

Due to his poor education and testing, Ali was was extremely unlikely to be drafted to the Vietnam War. That all changed after his association to the Nation of Islam and his name change. Suddenly, against 100,000 to one odds, Ali was now in line to be drafted. This reality threatened the core principles of his religious beliefs as well as aimed to emasculate the black hero that was Muhammad Ali. He would rage war, but it would be against the federal government not the Vietcong.

I ain’t got no quarrel with them Vietcong.

"No Vietcong ever called me n****r." R.I.P. Muhammad Ali, one of THE all-time greatest human beings. Still relevant: https://t.co/4IjtJHh74j

He would lose three and a half years of his prime boxing career in civil disobedience. From ages 26 to 29, Ali was forced into courts and stripped of his titles. He faced five years in prison and a $10,000 fine for refusing to be drafted into combat. He lost all sources of income and was ostracized by society. Still, Ali stood his ground. He believed he had the freedom to practice his religious beliefs, which prevented him from killing others.

In essence, the greatest fight in Ali’s life was against the government of the United States. The bout spanned years and robbed him of his wealth, youth and belts. However, it was Ali who came out victorious. A 29-year-old black man from Louisville, Kentucky beat the US in a unanimous Supreme Court ruling in 1971.

The court upheld his appeal of the conviction in 1967 for refusing to report for induction into the United States military forces during the Vietnam War. Ali would not allow himself to be oppressed, he would not be silenced or controlled. He would resume his boxing career, but more importantly was that he became a beacon of hope.

The lasting impact of that trial was a boon to the black psyche in America. They had witnessed his triumph over oppression. He risked his entire career on the belief that he was morally right and that he had the right to conscientiously object injustice. Defeating Sonny Liston, Joe Frazier and George Foreman made him great but Ali’s knock out vs. the US government made him the greatest of all time.