Chicano Muralist Carlos Callejo is a voice for his people. 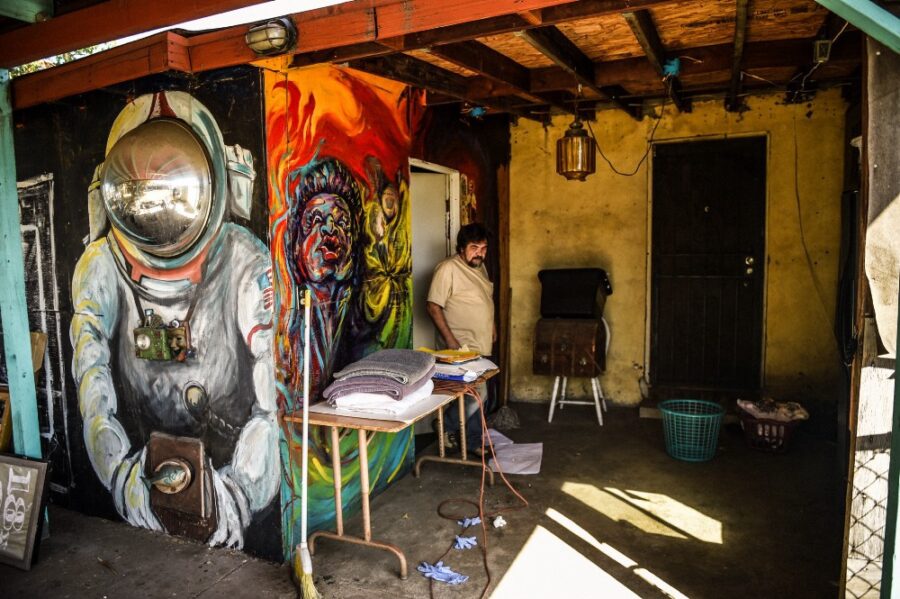 Imagine a painting of a young man with a Mexican flag wrapped around his lower body. Below him are iconic Mexican figures such as maracas, an Aztec stone head, a guitar, Lotería cards, a rooster statue, a ceramic comal, the boy’s padres, and his abuelita. He is surrounded by these objects and seen trying to lift himself away from these figures. The colors used for this painting in the bottom portion are Earth toned.

Above him is a sky painted like a fantasy enriched in baby blue and topped off with pure white fluffy clouds. In the sky is a history book, Mickey Mouse in a suit, a baby wearing Uncle Sam’s hat, and a television set with arms reaching for the young man as if it is trying to control him. This is the first painting that Carlos Callejo created. This painting was a representation of the indoctrination that was surrounding him as a Mexican American.

Photo of Carlos Callejo outside of his home on October 4, 2017 in East Los Angeles, California Pablo Unzueta

Callejo is one of the first muralist who evoked the empathy and culture of his Chicano people. He was born in El Paso, Texas and at the age of 9, moved to East Los Angeles. As a child, he had a speech impediment so he used his art to communicate and express to others instead of verbally communicating his emotions. While doodling in class and day dreaming he did not consider himself as an artist, but simply this was his means of survival. Growing up, he noticed the discrimination around him and was a teenager through the Civil Rights movement.

By the time he was a junior in high school, he joined other Chicanos in taking a stand by getting involved in the Walk Outs in 1968. This was the resistance as a response to the assimilation created by the school district towards Latino students. Chicano art hadn’t been establish vastly yet and was a tool to get their message across.

In an interview called Mural of the Beauty Nothing Stops with Jimmy Franco Jr. for Brooklyn & Boyle in February 2012, Callejo explained, “The term came out of the Chicano Movement during the late ’60s and ’70s. It essentially was a form of protest art…This contemporary mural movement was an art form that was utilized to help define the culture and self-identity of Chicanos and was primarily self-taught”.

In August 1970, a rally was put together known as the Chicano Moratorium. This was organized by activists in local colleges and the Brown Berets, a Chicano activist group founded in the 60s to protect against police brutality in the community, walked along side for protection. In all, there were 30,000 demonstrators made up of families, students, children, and Callejo was one of them. This massive gathering of Chicanos of all ages walked in the streets of Los Angeles to protest the high death rate of Chicanos dying during the Vietnam War.

Gentrification during this time caused many riots, police brutality, and even the death of an innocent journalist named Ruben Salazar. Activism did not end after this, but instead it grew. Callejo became a part of UMAS (United Mexican American Students), which eventually changed their name to MEChA (Movimiento Estudiantil Chicano de Aztlan). Joining this group gave Callejo a more organized standpoint when involved in the group meetings that decided on how they would liberate higher education, culture, and history to their people.

Photo of Carlos Callejo in front of one of his murals on October 4, 2017 in East Los Angeles, California Pablo Unzueta

Right after high school, Callejo went to the University of California State, Los Angeles where he started to express himself through making silk screen posters. He made propaganda posters with one simple color and very thin paper making it easy to stick to walls using a flower and wheat paste. Such posters would read, “Venceremos!” along side a portrait of Che Guevara. This act of bombarding the streets with posters was meant to politicize and educate certain populations that wouldn’t readily get this type of influence.

The messages put on the posters were rich in text and images relatable to the Chicano people. Being a muralist in 70s was new and not exposed to the rest of the world yet. Callejo was aware that Chicano art was not readily accepted and was outcasted by the art galleries of that time.

“So, what we were creating then was a more radical working class and nationalistic Chicano art that was coming into conflict with the existing world of bourgeoisie art and its traditional tastes, class bias, and conservative subject matter,” he said.

The fact that this was rejected was the main driving force for motivating the early development of community based art galleries.

The migration of Latinos crossing the boarder led to the rejection of the language, food, clothes, and rituals in the US. When Callejo would go to Juarez, Mexico he was smothered with love by his abuelita. When he thought of anything that Mexicanos practiced, said, or made it was a representation of his abuelita wrapping her arms around him.

Why not bring acceptance in duality of cultures so that whether you are Mexican, Panamanian, Nicaraguan, Guatemalan, Puerto Rican, Salvadorian, Chilean, Peruvian, and all Latino cultures across the board in South and Central America you could be proud of where you are from. Through his art, he is able to transcend unity through grabbing our soul by the roots and painting it on the wall.

The growth of Chicano murals was influenced by other artists before this movement flourished. Callejo said, “The strongest influence came from the ‘Tres Grandes’, Diego Rivera, José Clemente Orozco, and David Alfaro Siqueiros. Their powerful images of public art which depicted the historical and liberating struggles of indigenous people and workers as their subject matter, and the new forms and colors that they used, were stunning to the eyes of young artist at that time and influenced their work.”

Never before were indigenous people painted in the city presenting their struggle, strife, and progression through out the centuries. Most of Chicano culture was sweep under the rug and replaced with an American flag, Betty Crocker, and a Liberty Bell.

As he matured, the way he spread his message did as well. Instead of being very forward and in your face, he transitioned into having a more diplomatic approach with his public art. His success has brought him to creating over hundreds of mural projects nationally and internationally. He was awarded by Lila Wallace Readers Digest Arts International Program where he studied in Spoleto, Italy. When he came back from studying abroad, he went back to El Paso, Texas. What he had brought back with him was the Fresco style of painting that originated from the Roman Empire. Fresco painting was also created by the Aztecs and revived through artist like Diego Rivera.

This style of art was able to endure for many more years because Callejo agreed to teach students about this style of art and use it in a project for a local El Paso Church called Sacred Heart Church. His goal was to incorporate this style of art with a modern form. Callejo was recognized as a well- known muralist at this time. Amongst many proclaimed artist, he won a competitive commission in 1991 for an opportunity to paint a mural in the El Paso County Courthouse Atrium.

They made this decision by distinguishing Callejo as a muralist, which is much different than a painter who is used to smaller canvases. He was invited in 1993 to Washington, D.C. to paint a mural for the Smithsonian Institute’s 27th annual Festival of American Folk Life. Carlos is the founder/co founder for organizations such as SPARC (Social and Public Art Resource Center), CAUSA (Coalition of Artist United for Social Action), and the Artist Director for the Spaghetti Bowl Murals Project.

These organizations had given Callejo the positions as art director, project coordinator, curator, and technical consultant. He explained, “During this period, artists tended to mostly learn from each other rather than having been trained at traditional art institutions. Also, the traditional funding sources were not supportive of our mural work so we had to depend on our own support groups and collective resources for financing. Chicano art was meant to be public, free, and created for the purpose of educating people.”

One of the programs he contributed to influenced and prevented teenagers to stay off the streets and out of gangs by giving them the opportunity to make murals together. He was the head advisor with a few other artists who split up into groups and helped created murals of their own. Carlos Callejo stands in front of an outline of the mural that resides in the El Paso Courthouse in El Paso, Texas. Pablo Unzueta

Callejo’s communication through his murals could speak louder than any words could. Callejo shed light and echoed the voice of his people by using visual literacy. He puts it into his own words:

“I particularly see murals as much more than decorations, while murals do add color and liveliness to a neighborhood, this is not my main objective…Murals that truly speak for a community and its social concerns are a real inspiration, both as a model for the artist and as a monument to the struggles and aspirations of the community.”

Now, our society is growing to develop more awareness and pride towards Chicano culture than ever. We are seeing more Chicano artist who follow in the footsteps of Callejo, and the only difference now is that they use issues that are relevant today’s issues. Thus, what we can hope for now is the continuation of inspiration from Chicano artist like Callejo to transcend into further opportunity in this country for all Chicanos.