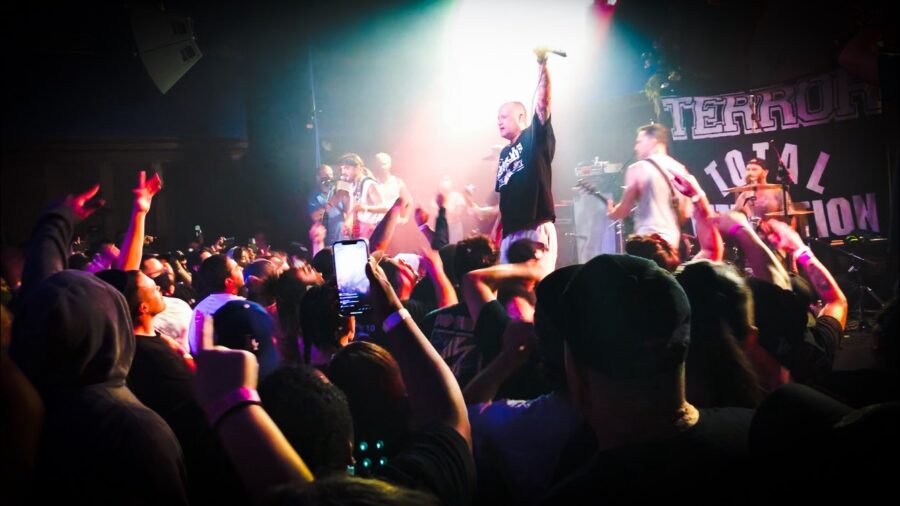 On Wednesday Sep. 8 2021, fans of heavy music from across the state gathered at Lodge Room in Highland Park to witness the local legends of hardcore, Terror, take the stage for their first show in Los Angeles County in over two years. For this performance, they were joined by some of their highly revered colleagues; Drain, Dare, and One Step Closer.

For most of those in attendance, this would be their first concert since the world was doomed to lockdown on account of the global pandemic. Not only was the room filled with pent up anger and frustration of having lost what we’ve grown to know and love, but it was also overflowing with dedication, appreciation and understanding for the things that we hold to be good and true.

The deafening sense of community, family and friendship reverberated from wall to wall along with the echoes of shrill screams, chugging guitars and the crowd belting out their favorite battle cries.

The first band to open the show was Dare; straight edge hardcore hailing from the streets of Orange County, California. They were performing in support of their new album, “Against All Odds”, which was released by Revelation Records on Aug. 20, 2021. Once the lights went low, I knew a dramatic evening was about to unfold. Before I knew it, I was dodging swinging fists and flying bodies. It was more than a warm welcome home, it was the ignition of a forest fire within our hearts; and Dare certainly set the bar while setting the brush ablaze.

Shortly after we were graced by One Step Closer; a band that carries a humble mix of skate punk/post-hardcore with an east coast flare sound. These strapping young lads took me by surprise and took the crowd by storm. Their youthful energy — coupled with the punk rock sound of the early 2000s — resulted in a performance that was definitely something special. Along with a few crowd favorites, they blasted through a few new tracks from their upcoming album which will be released through Run For Cover Records on Sept. 24, 2021. You’ll want to keep a close eye on these guys in the years to come.

Next were the wild and crazy guys from Santa Cruz, Drain. I had been dying to see this band since I grabbed their latest album, “California Cursed”, which came out on Revelation Records on April 7, 2021. Their sound emanates an atmosphere of an endless summer full of hot nights, back alley fights and smiles full of chipped teeth. Their music will hype you up to the point of wanting to punch yourself in the face.

Even before they got out on stage the crowd was rippling with aggression and excitement. By the time the band was closing their set with their title track, it was a tidal wave of stage dives and circle pits. Getting to chant with the crowd at the top of my lungs was something I’d been dreaming about for the last two years.

Finally it was time for the headliner; one of the heaviest hitters in the genre, Terror. During my high school years, I was constantly surrounded by punk rockers and metalheads wearing Terror shirts. Their reputation and legacy is deeply rooted in their fans all across the country, but especially here in Southern California. Their mantras of walking with the underdog and making your own rules mean more to us now than they ever have. Every single person in that room was moving, and every single voice was being heard.

As we sang together, we were tearing down the walls that have been built within ourselves over the past two years. To finally breach the boundaries both mentally and physically amongst the hardcore community was a union unlike any other. Even though we’ve endlessly shouted the words throughout the years, it legitimately feels true to say that through all our joys and pains, you can’t deny the keepers of the faith.

This night will be with me for the rest of my days.

This is what California hardcore is all about.