6 Questions You Probably Had After Watching “Rick and Morty: Bushworld Adventures”

What is the “bloody bush dimension?!” 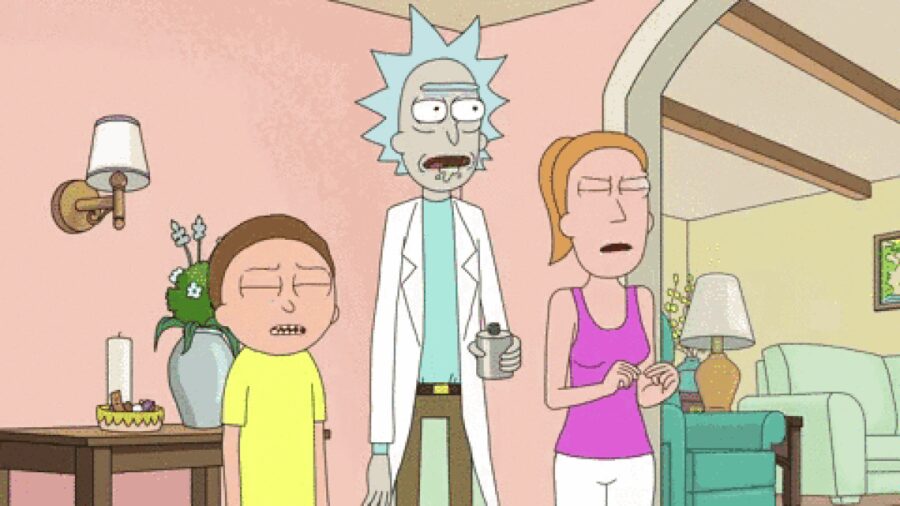 Warning: Some of the links, images, and featured content in this article are very graphic and violent. Keep this in mind before you click on something.

There were probably two kinds of people who were awake long enough to watch the new “Rick and Morty” episode that premiered Sunday night. Either you were a) someone who couldn’t sleep and were expecting a rerun of the “Mortynight Run” or b) hoping Adult Swim would do a repeat of what they did last April Fool’s Day and drop the first episode of the widely anticipated fourth season.

However, viewers were instead welcomed with this strange entity titled “Bushworld Adventures.” The episode left viewers confused and in shock over what they just saw, and so with that in mind here are six questions you probably had about “Bushworld Adventures” with answers to them.

1. What the fuck happened Sunday night?

At 11, Adult Swim’s lineup showed that a rerun of the “Rick and Morty” episode “Mortynight Run” would play. Instead of the usual opening credits, an entirely different opener playedthat wasn’t anything like the usual “Rick and Morty” title sequence in both animation style and content. It featured lots of Australian references such as Rick beating up a kangaroo and Morty taking a picture of Rick in front of The Big Banana. And it was a lot darker than the original, featuring clips of Beth and Jerry in the middle of an argument that turned violent and a naked unidentified man sitting in a messy room covered in empty alcohol bottles.

The episode only ran for more than 10 minutes, and played numerous times in the span of an hour instead of the intended “Rick and Morty” rerun and an episode of “Mike Tyson Mysteries.” The marathon of “Bushworld Adventures” ended once April Fool’s Day was over at 12 a.m., and Adult Swim returned back to its schedule.

WHO ELSE IS WATCHING THIS APRIL FOOLS DAY RICK AND MORTY ?! #rickandmorty pic.twitter.com/6dB9FFt6Sl

The new season of @RickandMorty is bloody tops! pic.twitter.com/oU0VGtczQi

“Bushworld Adventures” can be best summed up as “Rick and Morty’s” evil Australian twin brother. Directed by Michael Cusack, who is notorious for his animations that are very violent, sexually charged, and just plain surreal, the episode is exactly what you’d expect if you’ve seen any of Cusack’s previous work. The entire plot of the episode begins like any other “Rick and Morty” episode, with Rick dragging Morty on another adventure. In this episode, it’s an eight-hour road trip to Bendigo to get a “green cube.”

‘We’re gunna go to Bendigo, Morty!’
IN one of the most unlikely crossovers in cartoon history, Rick and Morty have taken a wild ride to Bendigo. The…www.bendigoadvertiser.com.au

However the trip is just ten minutes of pure nightmare fuel, as Rick tells Morty his plans to commit a murder-suicide with the two of them while holding a realistic looking gun to his head. From here, the rest of of the episode goes downhill.

3. What are some highlights from “Bushworld Adventures”?

There are three scenes that sum up the how wild this episode got. The first has Morty asking Rick where they’re going while Rick drives like a maniac with his eyes bulging so wide he looks like the history teacher from “Daria.”

In the middle of explaining their Bendigo road trip plans, Rick pulls out a gun that looks nothing like the portal gun Rick usually has, but rather a real gun and holds it Morty’s head. The way Morty’s voice trembles as Rick tells him his plans to commit murder-suicide is only amplified by the horror movie music that plays.

The second scene is shortly after their car “breaks down” (Rick put diesel in the car) and Morty has to go pee. Rick brings him to the “bloody busy dimension” which is really the woods where Morty gets bitten by a snake… in the genitals.

Lastly, the final highlight has to go to when Rick goes to see Uncle Barry, a goblin recommended by Jerry who was posing as a penis wizard, to help him and Morty get to Bendigo. Barry and Rick bond instantly, and for a moment things seem like they’re getting somewhere as Barry offers to take them to Bendigo. However the horror movie music starts to play again as Barry’s “dementia starts flaring up” and he forgets who Rick and Morty are and instead thinks they’re house intruders.

If you think I’m making any of this up, go watch it yourself.

4. Is it cannon to the “Rick and Morty” universe?

Yes and no. Adult Swim hasn’t confirmed it, but in an article by Heavy we can assume this is at least a “Rick and Morty” universe from another dimension. In fact, Heavy had an interesting take on why this could be canon:

“If you really want to make this episode canon, maybe think of it as a TV show on Interdimensional Cable, but not involving any characters that C-137 Rick and Morty are going to be meeting any time soon.”

Needless to say, it’s a good chance it isn’t. But Justin Roiland did say everything is canon because of infinite realities so, it’s unsure what to believe.

@CurveTheChicken they're canon in a self contained alternate reality. Infinite realities. Everything is canon.

5. What did other people think?

As expected, there were mixed reviews about “Bushworld Adventures.” When it first debuted, lots of fans seemed to hate it. But by the next day and as the shock value went away, people loved it.

@RickandMorty is this punishment for the Szechwan sauce thing?

This Rick and Morty Bushworld Adventures is unwatchable

But some people weren’t sure if what they saw was even real.

Currently in bed trying to stave off this death plague and trying to figure out if I'm actually seeing this same Rick and Morty/Bushworld Adventures thing for the 3rd time in a row or if it's all just one big fever dream.

While others well, they were just happy to see Australia being represented accurately by the cartoon.

Possibly my favourite part of Bushworld Adventures is the brief snapshot of Rick and Morty visiting The Big Banana in the opening montage. Credit to @MichaelRCusack for capturing its slightly underwhelming size. pic.twitter.com/PC5cuRgqc3

6. Listen, I don’t really care about this. I just want to know what’s happening with season 4.

Understandbly, people were expecting a new episode from the “Rick and Morty” team on April Fool’s Day so the fact that there wasn’t left a lot of fans disappointed.

The thing is, “Rick and Morty’s” return is still up in the air. According to Vice, a writer for the show said the next season could even air all the way into 2019, and that none of the writers, including creators Dan Harmon and Justin Roiland, have started working on it.

While Adult Swim hasn’t ordered any episodes, however writer and producer Ryan Ridley said he doesn’t doubt they’ll be a fourth season. Just it won’t be released anytime soon. But that doesn’t stop people from angrily lashing out at the team for the lack of episodes.

Dan Harmon: *sneezes*
Rick and Morty fans: WHY DON'T YOU SHUT THE FUCK UP AND SNEEZE OUT A NEW SEASON, DAN!

So it’s unsure when it’ll return, but this is probably not the end of Rick and Morty’s adventures.

BONUS QUESTION: Who is this unidentified man?