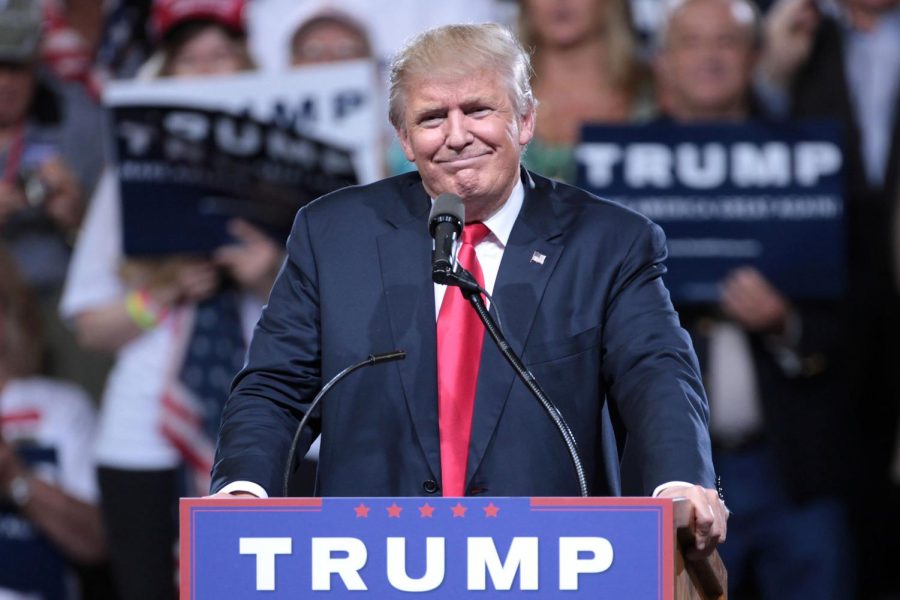 Millennial Bullsh*t is an op-ed column by Angelica Cruz based on her “Millennial News” series. This column will break apart the news and act as a resource to drive the movement for change for the younger generation, because honestly we’re tired of all the bullshit.

Donald Trump is the ex-boyfriend who keeps fucking us over, and sometimes we don’t even realize it.

Here’s what I mean. A day after I broke up with my ex, I spent the next few days scrolling through their Twitter to see if they had posted anything about me. My friends, who knew what happened, would tell me I looked obsessed the way I scrolled down their feed and analyzed everything they posted from the beginning of our relationship to the end. I told them I was just checking it to reflect on what happened, but honestly I wanted to find something to talk about to put the blame off me about what had happened.

The media has a similar relationship with Donald Trump.

Let’s be honest now, Donald Trump has invaded our news cycles with a 24-hour invitation to be the soup of the day. Whether its affairs with Stormy Daniels or meetings he has with foreign leaders he previously insulted, you can’t watch or look up the news without seeing his name.

On April 28, Michelle Wolf was the invited comedian to this year’s White House Correspondents’ Dinner. As she gave her monologue, the crowd responded with moments of laughter, awkward silences, shocked noises, and a cutaway of Press Secretary Sarah Huckabee Sanders who looked at Wolf with a blank but obviously uncomfortable expression while the comedian roasted her.

In the last part of her monologue, Wolf ended with this statement:

“You guys are obsessed with Trump. Did you used to date him? Because you pretend like you hate him, but I think you love him. I think what no one in this room wants to admit is that Trump has helped all of you. He couldn’t sell steaks or vodka or water or college or ties or Eric, but he has helped you. He’s helped you sell your papers and your books and your TV. You helped create this monster, and now you’re profiting off of him. If you’re going to profit off of Trump, you should at least give him some money, because he doesn’t have any.”

The instant she walked off stage, Wolf became a viral hit for all the wrong reasons. Wolf’s monologue became the topic of media scrutiny, with journalists demanding she issue an apology to Sanders and for action from the White House Correspondents’ Association (which they gave in an apology condemning the comedian’s act).

While the media was criticizing, analyzing, and writing anything they could on the performance, Sarah Huckabee Sanders’ smokey eye and how Michelle Wolf was a “bully,” the Trump Administration updated the US Attorneys’ Manual. Their edits included deletions of a subsection titled “Need for Free Press and Public Trial,” as well a section that talked about redistricting and racial gerrymandering, meaning there are no direct references on either topics in the manual.

Michelle Wolf was right. The media is obsessed with Trump. Not saying we shouldn’t report on him, he is our president and he is a part of creating an administration who will be making some of the biggest decisions for our country. However, the media needs to acknowledge that it had a role in creating Trump and because of that, we cannot falter in making sure he does not do things under our noses.

In an article by Politico titled “Did We Create Donald Trump?,” it reads:

“If this makes the media complicit in Trump’s rise, so be it. But the media didn’t create the Trump political phenomenon. The real origin is far more interesting: Trump artfully created the media that in turn created Trump the presidential candidate….
Trump may yet turn out to be a fairly conventional American populist when it comes to his policy views, but he’s already proved revolutionary in his ability to create — and then manipulate — the media platforms that enable his politics. His breakthrough idea was to cash in on his four decades of media exposure with a political message that uniquely combined victimhood, bragging and patriotic obfuscation.”

Trump figured a way to manipulate the system to his advantage. He was nothing the world had ever seen before and the media saw this and took it as an opportunity.

In an interview with “Rolling Stone,” CNN International’s Tony Maddox said,” “[Trump] is good for business.” And it was because of that the media took it to its advantage by giving him the platform and by endlessly obsessing over everything he said and what everyone else had to say about him and his team.

Now I’m not saying the media shouldn’t report on Trump constantly. Unlike someone’s ex, he is not someone we can block on Twitter and suddenly he has no effect on our lives anymore. He is someone in a position of power, and someone who has repeatedly abused this power and shown he does not have the best interest for the people he claims to serve in mind.

But at the same time, the media needs to pick and choose its battles on how to hold him accountable; because what a comedian said at a White House Dinner no one really pays attention to begin with isn’t the way to do it.

Other News Highlights
Ty Cobb is Out, Mike Pompeo is In

In another update, we made a list of people who left and were added to the Trump Administration. This week, another departure happened when Ty Cobb, Trump’s top lawyer was reported to be leaving the position. He will be replaced by Emmett T. Flood, the attorney who represented Bill Clinton during his impeachment trial Cobb was involved in the handling Robert Mueller’s probe of Russian’s interference with the presidential election.

On the other hand, CIA Director Mike Pompeo was confirmed by the Senate as secretary of state. While he boasts years of experience, he also boasts numerous statements that were both controversial and offensive.

It’s so disappointing that six Democrats voted with Republicans to confirm Mike Pompeo. What does our party stand for if we don’t reject bigotry, climate change denial, and a foreign policy of aggression?

To-Read for the Week: While Cobb’s work with the Trump Administration will probably be forgotten, it’s Pompeo whose past we need to brush up on. Read Vox’s “Mike Pompeo’s biggest problem is Mike Pompeo.”

After being accused of rape and sexual assault by about 33 women, Bill Cosby was found guilty of three counts of aggravated indecent assault. The case had originally ended in a mistrial, but in the months between the first trial and the second, the #MeToo movement occurred and the jury voted against Cosby and in favor of the women who sued him. Cosby was one of the first people convicted since the movement began.

To-Read for this Week: While this is a step forward in regard to the #MeToo movement, but there’s still much more work to be done. It took a second trial and 33 women to come forward for the Bill Cosby case to be taken seriously. That is not okay. Check out Teen Vogue’s, “Bill Cosby is Guilty — But #MeToo’s Work is Not Done.”

Earlier this year, the Trump administration announced it was planning to end the Deferred Action for Childhood Arrivals (DACA) program. By ending it, thousands of undocumented young immigrants who came to America as children would be deported. In the words of this Vox article, “There’s never really been a time when a generation of people, raised and rooted in the United States, has been stripped of official recognition and pushed back into the precocity of unauthorized-immigrant life.”

Recently, two federal judges have issued preliminary injunctions against the administration, which allows immigrants who have work permits under DACA to apply for two-year renewals. However, DC District Judge John Bates’ ruling also included the Trump administration to allow immigrants who qualify for DACA apply for work permits, so long as they are enrolled in school or having a degree,and not having a criminal record. This ruling has 90 days before it can be implemented, meaning the Trump administration has that time to try and find a way to backfire it.

With that being said, a state-led lawsuit is happening against Trump on DACA as well. Seven states — Alabama, Arkansas, Louisiana, Nebraska, South Carolina, and West Virginia, an Texas, says the Obama administration overstepped its authority with DACA and are planning to sue the federal government.

7 GOP-controlled states including Texas are suing the Trump administration to end DACA.

3 federal courts have ordered the program, which protects about 700,000 people, to continue since Congress failed to come up with a solution by President Trump’s March deadline. pic.twitter.com/pEHuU218Tc

To-do for this week: This is going to be a lengthy battle, with the outcome affecting the livelihood of many people in America. Be sure to keep up to date with what’s going on.

Kanye West announces he is a Trump supporter.

A few days ago, musician Kanye West announced he was in support of President Trump. The comments came as a bit of a surprised to fans, who knew the musician as progressive and did not expect this from him. However, this wasn’t end of a controversial week for West. Shortly after receiving media attention for his words, West gave an interview on TMZ where he made comments that slavery sounded like a choice. The comments were received with backlash and criticism, and many fans considered Kanye officially cancelled.

To-do for this week: While it’s unfortunate some of our childhood heroes are coming out as supporters of this hate-filled administration, we must hold accountable people who use their platforms to support people who spew hate-filled campaigns. The best explanation to why Kanye’s actions were dangerous, in spite of his freedom of speech, was from TMZ employee Van Lathan’s response to the singer’s interview on the show. If your friends ask why it’s a big deal what Kanye said, just send them this video.