Why I Took Naked Photos

Having my picture taken naked and posting it on Instagram helped me understand myself. 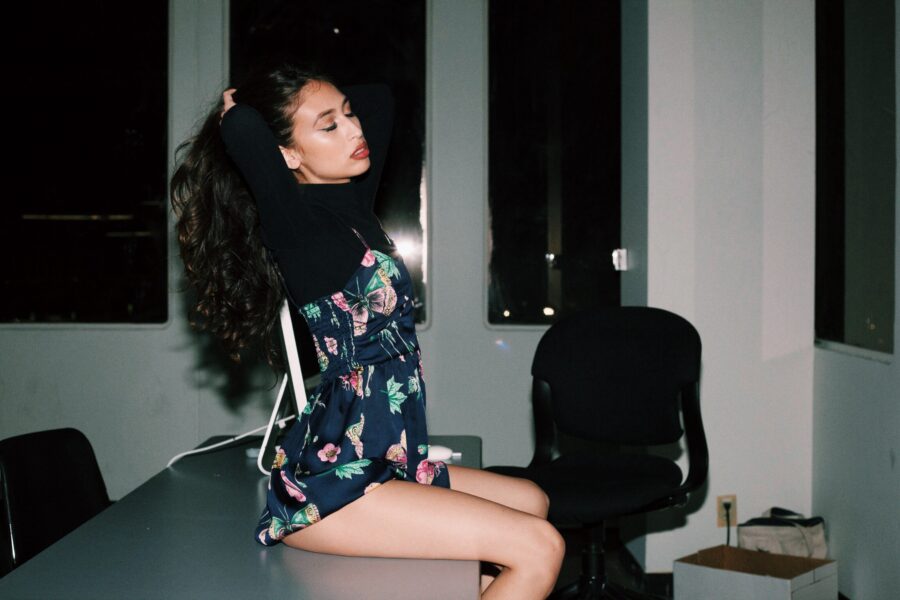 It was September of 2015, and I was 20. I decided to model for a photo shoot that included nudity. A year prior, I started following @baariksgallery on Instagram. His photos attracted me because of their quality, and his concept was daring. He would take nude photos of women publicly. He wouldn’t just place a naked girl in the middle of a Target and start shooting photos — he would sneak around public libraries, empty college classrooms, rooftops, gas stations, movie theaters, arcades, around the city of Los Angeles, and so on.

His photos were rebellious and showcased coming into adulthood, and I wanted to do exactly that: rebel. @Baarkiksgallery now has 134k followers. At the time it wasn’t as much, but he still had a large following of fans who admired his work. So I messaged him and we tried to arrange to meet, but he hadn’t moved from Hawaii to Los Angeles yet. We had to rain check the photo shoot. A year later, he started living in Downtown Los Angeles. I decided to dive into this vulnerable self project.

At 16, I wanted nothing more than to become a Victoria Secret model. I would watch their fashion shows live and see so many beautiful and exotic looking girls, and I was mesmerized. When my mom would get VS catalogs, I would go through them and cut out pictures and think to myself, “Ok, how do I become this? One day I’m going to need to do their job.” I purchased all types of fashion magazines so I could plaster those advertisements with model’ s faces on my walls. After doing homework, I would watch interviews of Adriana Lima talking about how she was discovered and how she reached VS royalty.

Sometimes, I would even do push ups and crunches in my room while my sisters laughed at me. At 16, I was given a couple of opportunities to walk down a runway in a Mt. San Antonio College fashion show for emerging fashion designers displaying their handmade pieces. This is where I learned that modeling is actually tiring. Hours spent on hair and makeup and having to wear heels for a long period of time while anticipating to walk down a runway was no cake walk. The stress was overwhelming, but the rush it gave me once I was done was euphoric.

When I graduated from high school, I had wised up about the fact that you had to be 5’9″ to walk the runway and have a certain look; something that wasn’t me. I was okay with that, and I decided to focus on furthering my education in college. But this old dream still lingered in my mind, and I attempted a few photo shoots with amateur photographers. These shoots helped me test the waters and push my limits into experimenting with bold poses.

When I met with @baariksgallery we discussed wardrobe ideas, which didn’t cost much because I wasn’t going to be wearing much. I’ve taken bikini photos, but to actually just be in a thong and a bra made me a little nervous. The reality of exposing myself at 20 didn’t set in yet. It was more of a mission in spirit of a rebellion, so I was just determined to get out there. I wore high waisted shorts and a T-shirt to cover up whenever I needed.

He brought an assistant with him, an apprentice and friend who would help hold jackets, a backup camera, and the bag I came with. The rides on the pier were closed since it was around 9 p.m. We jumped over the 2 foot gate, and I stripped all my clothes off. The only two things I kept on were my underwear, shoes, and a Palace windbreaker that I borrowed from his assistant.

They Can See the Most Private Places On My Body

We then made our way off the pier to the sand where there are bar rings and ropes to exercise. The entire time I was thinking to myself that I wanted to look like a pro, but in reality, I was just an amateur. We eventually crossed the street to a small playground. No one was there so we took the opportunity to get shots of me rock climbing up the wall and inside a violet tube where kids can run in and out of. Our last stop was Santa Monica.

I was asked to go fully nude since the whole time I was just in a thong. During this part of the photo shoot, I felt cold and empty. When climbing and walking around they could see my vagina. During this time, I thought to myself, “I can’t do this.” When I climbed down from the playground, I encouraged the group to move along to another location. I put my windbreaker and underwear back on. We walked to The Santa Monica Place Mall. There were only a few security guards walking around the premises. At this time, I also put on a bra I had brought for a different look. We took a couple photos, but that was it. We hugged, I thanked them, and we parted ways.

When It’s All Said and Done

On my drive home, there wasn’t much for me to say to myself. I was relieved I didn’t have to be naked anymore. At this time, I was more exhausted from the walking and posing.

It didn’t take long for the photos to be edited, sent, and posted on @barriksgallery. Once they were posted, I got DMs, comments, friend requests, and likes. There were some people I knew, but I had no clue who the majority of the people were. I’m sure to some extent, not even @barriksgallery knew who they were either since he has a mass following of people from all over the world. I felt popular and admired all at once.

While scrolling through the photos, I decided to post the ones I liked the most. I knew I would be playing with fire if they were too explicit because I had some family members following my Instagram. So I picked the ones where I was semi-clothed. My mom didn’t hesitate to call me when she saw what I had done. She was outraged and told me to take ALL the photos down. This made her question why I would ever think it was okay to take explicit photos and post them on the internet. My mother was sickened that the photos were publicly posted, and perverted men would be looking at them. I felt bad because I knew she was right. The same day after my five minutes of fame, I asked for @barriksgallery to take all my photos down for family purposes. He agreed, of course, and that was that.

I tried to figure out what just happened. The decision to pose naked and then take them down seemed like there was an underlying motive within myself. It took me a while to realize that this was just about what I originally had in mind: rebellion. I wanted the chance to experience something that wasn’t appropriate just so I could say that I’d done it.

Anyone who takes pictures for a living, or for their personal profiles, or for any type of industry, does it for their own reasons. I do not regret any of this because when I was doing it, I felt free. I was roaming around with the sea breeze touching me. The attention made me feel important and acknowledged. The female body is a sacred and beautiful form of art. The female anatomy is powerful and can create life.

In the name of art, I completely stand by the choice to express the female naked body to the public openly without hesitation. The only problem I had with posting naked pictures on the internet is it didn’t express the appreciation I have for females, but just a naked woman’s body. The photographer that took my pictures is a passionate artist in film and photography so there was no problem there. It was more where my heart was at the time.

Ultimately, I didn’t want to be known for showing my naked body publicly. Instead, I wanted to pursue a name in journalism rather than on Instagram with 100,000 followers. I wanted to give myself a voice through writing about causes I cared about. Social media is influential. I didn’t want to give others, and even younger girls, the notion that self worth lies within your image.

Modeling is hard work, and I admire women for doing it, clothed or not.